It’s my favourite time of the sports year again, March Madness! As usual, President Barack Obama has submitted his “Barackets”. As usual, I will monitor it throughout the Tournament to see how it’s doing against the general public, and a few others’ brackets, including my own. I am 3-1 against da Prez in the past 4 years. 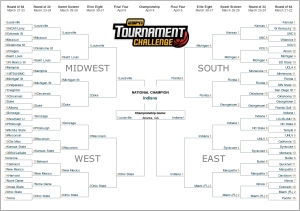 President Obama started off well 4 years ago by picking national champions North Carolina. But then we didn’t pick a Final Four team for the next two years, before picking 2 last year. Last year was the only year I lost to da Prez so far.

In a year when it’s a bigger free for all as to who might win it all, than in most other years, President Obama has made relatively safe picks. He has Indiana winning it all, and was big on the Big 10 as the best conference so he favoured their teams a little more than other conferences in his picks. To round out the Final Four, da Prez has Ohio State (2), Louisville (1) and Florida (3). You can look at his picks in the graphic above, or at this link where I used one of my ESPN pool picks to duplicate his picks for easy access on its performance at any time.

So to whom will I compare the President’s picks?

Well, there is Nate Silver’s advice. If you don’t know, Nate is the person who correctly picked all 50 states in the last US Presidential election. He is a data miner, statistician, whatever you want to call it, extraordinaire. However, he did get the Super Bowl wrong, so sports may not be his forte. He didn’t actually make picks. He just gave odds for each team advancing. Louisville was his champion, with Florida being the only non-#1 team to go so far. Obama has great researchers who definitely know about Nate. That Florida pick da Prez made for the Final Four might not be a coincidence! I made an entry with Nate’s odds translating to advancements (see list at end). It is a fairly safe set of picks, as you can imagine, relatively speaking. The NCAA Committee didn’t make rash decisions in its seeding, you know!

Then there is the wisdom of crowd, or “crowdsourcing”, where the minds of the many are better than the minds of the one, or the few, so the story goes. It doesn’t apply to every situation, but I’ve made an entry for it with data from the CBS pool results (see link at end). On the street, some people might call this the “popular” pick. The popular pick has Ohio State in the Final Four like da Prez, and strong Top 10 performances like da Prez, but all other #1 teams made it, and Louisville winning it all.

Then there is my Digital Citizen bracket (see link at end). I have Louisville winning it all. I like how they’re coming in hot from a tough conference. I have Wisconsin, Indiana and Florida otherwise. I do have some faith in Nate, let’s say it that way, with the Florida pick. And I, like other brackets discussed above, also don’t have a lot of faith in Gonzaga being a #1 seed, as much as I love to cheer for them. This is the bracket with which I will compare my performance against da Prez’s.

I picked a bit safe, and I matched da Prez a few times since my main goal here is to beat his Barackets. Winning would be ridiculously hard when you see how well the winners on ESPN have done over the years. I have no idea how they do it, picking near perfect brackets, which, if random, is a 1 in 9.2 quintillion chance (National Post). So for fun, I loosened up the “logic” and went with the “gut” in a more chaotic pick that might be representative of the parody we know exist.

So there you have it, the five brackets against which I will compare to President Obama’s. I will post their standings after each round for comparison not just to each other, but also relative to the entire pool on ESPN.

If you have an entry, do leave a link in the comments to it and tell us how you’re doing against da Prez! And anything else you’d care to share as well! Good luck!