These are guitar and/or ukulele tabs I have compiled myself. This list will be growing with time as I have plenty more which need only to be typeset a bit better for posting online.

These tabs all fit on one page to avoid the inconvenience of page turns. However, the letter size tabs (8.5″ x 11″) may be too small for your eyes. If so, you can either enlarge to tabloid size (11″ x 17″) using an automatic enlarge feature on many photocopiers, or download the tabloid sized versions for printing. The tabloid size tabs can be inserted into a typical letter sized binder on the 11″ size, and folded almost in half to fit. You just open each tab to use it.

Links to individual tabs with videos

Blowin’ in the Wind (Bob Dylan) [arranged in 3 keys]

The Comparison Song (by me)

Edelweiss (from the Sound of Music)

Got Something to Say (by me)

I Shall Be Released (Bob Dylan)

In the Still of the Night (The Five Satins)

My Back Pages (Bob Dylan)

Ugly Stamps (by me)

The Water is Wide (Traditional)

Where Have All the Flowers Gone? (Pete Seeger)

You Raise Me Up (Josh Groban) 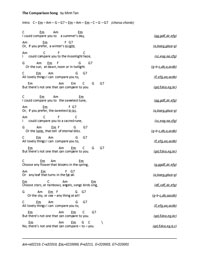 My tabs are all in downloadable PDFs that fit on letter-sized pages. Most are on one page. The fonts are embedded. What that means is you can print them out neatly unlike many web pages that print out with things all over the place, whether ads or sidebars or whatever. They also look different on different browsers.

My tabs have the chords where you’re supposed to change chords. The PDFs also ensure they stay there rather than move around because of how various programs handles “spacing” and/or various fonts. My tabs also have notes written out. They are only in letters, not musical notes on a staff, though. Notes written out in capital letters mean they are an octave above a non-capitalized note that is also present in the song.

Often, tabs found on-line don’t work well for solo guitar or ukulele. People just tab them off the real songs and they sound like crap in places, missing parts or just lacking without additional band or vocal support. My arrangements are for one person with one instrument. Adding stuff is easy, but you know my tabs work if only you were present with a guitar or ukulele. I do rearrange the songs a little bit more than just to make things work. Sometimes it’s out of creativity. Other times it’s just to make things a little easier to play and/or sing. With the clarity of the tab presentation, though, it shouldn’t be too hard to figure out nuances I have put in my arrangements.

Further to the notes being written out and the chords place exactly where they should be for changes, I include either videos that have the song tabbed or audio recordings I’ve made of them. That way, you can hear the closest thing to the tabbed song to help you figure things out. I refrain from recording where I don’t have to in order to spare people from having to listen to me, especially if there were a recording close enough to the version I tabbed. However, in some cases, I just need to do so because the arrangement is different enough from anything recorded.

I don’t have songs that I deem are difficult to play. I’m at a pretty basic level of playing so if I can play them, I think most people can. I can’t even play bar chords right on a guitar. Now, that doesn’t mean the songs aren’t good. Great songs sound good even with the least bit of accompaniment and lack of fancy ornamentals to the music. In terms of song challenges, I’d say you’d be better off worrying about your voice range and vocal dexterity than guitar/ukulele skills in playing the songs. I’m not implying the vocals are that hard. Just a bit harder than the basic guitar/ukulele skills required in some songs.

For my needs, I also post them to share with friends and to have access to at any place where I can get an Internet connection. I hope you find the tabs useful and like them!