I am in the midst of designing the next phase of my life, as per the course at Stanford, taught through the book of the same name. In my own innovation to this process, I created what I called a Life Strategy Map (diagram below) to clarify for myself what I really wanted out of life so I can focus my living as much as possible towards achieving outcomes on that map. Since I had, both, the diagram and supporting explanatory text for me to be able to use it, I thought I’d share in case anybody wanted to try the same thing for themselves.

I’ll start with explaining what a Life Strategy Map is, and what it’s supposed to do, along with some instructions on getting the right level of details in it. In a few follow-up posts, I’ll go through mine in hopes it may clarify examples for you, and/or give you ideas for your own Life Strategy Map if you should want to try the exercise. 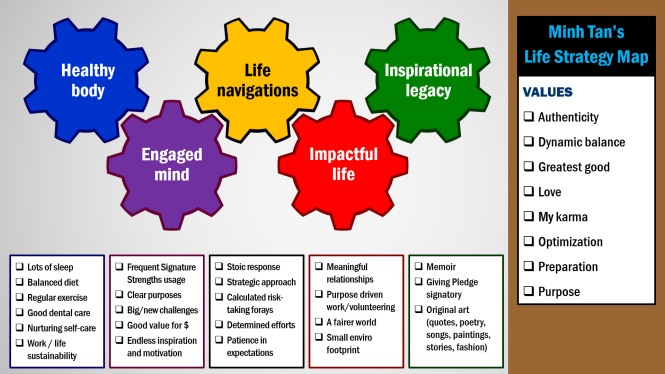 What is a Life Strategy Map?

It is a diagram showing:

It denotes what you want out of life with purposes behind each outcome. Those purposes should be clear to you, and should either be clear to most others looking at it, or can be quickly explained to them.

It should NOT tell you how to achieve your outcomes so as to leave lots of options open for you to brainstorm, then narrow down and choose, later.

Going through each of those four bullet point features of a Life Strategy Map, with examples from mine, may help explain it better.

What are “outcomes” and how do they differ from “outputs”? This is a tough question to answer. My favourite way of explaining the difference is that if you asked “so what” about an outcome, you have a compelling answer, preferably in the difference the achievement made, whereas if you asked the same thing about an output, you might well find yourself asking the same question again. Take the following two examples:

Sometimes it is good to have concrete numbers for outcomes, almost like output. An example would be a well thought out target for financial independence. If you have such backing behind something like a goal to save $1.2 million dollars, then set it as an outcome. Otherwise, I’d state the outcome as being not to have to worry about money again, with the operational details to be figured out later to be an estimated $1.2 million.

Below the main outcomes are more specific outcomes, like sleep more being one of mine. Note how there isn’t detail like how much more, when, what I might have to give up in my current day for it, etc. I just know I’ll have to get there. How will be another matter later. This Life Strategy Map isn’t supposed to be instruction manual, but it’s not totally useless, either, since it’ll guide the content for your “instructional manual” or “operational plan” later, to make your dreams into reality.

Finally, you want your outcomes here to be as general as you can without being unclear in meaning, even if someone else’s interpretation may be a little different than yours. Everyone generally knows what a healthy body is, or what to sleep more means. Ask them to define it and they won’t give exactly the same definitions. However, they should be mostly rather similar, without me having use more than just a few words to state the concept.

There is a lot more freedom here for how you show the interplay among your highest level outcomes. I chose gears to represent the relation of my outcomes because I think of time and effort put to these outcomes as not only interrelated, but also finite, so that what I do towards any one, or combinations of, outcome/s, also affect the rest. If you don’t like gears, you may also consider:

You should, obviously, be able to explain why you chose your relational diagram fairly easily as I was able to do for mine.

These should be the values you believe most in, that you will apply uncompromisingly, or as close as you can in being an imperfect human. While there are many people would love to claim to use, I would suggest thing really hard about the ones that apply the most to you, and narrow it down to a short list, whatever “short” is for you, but make a good effort at minimizing this list.

I’ll share from my experience that I left out respect on my list, despite respect being something I show a lot of, and something I have extreme regard for in general life in my thinking and in my actions. So why did I leave it out? Because I will be judgmental enough to not give some things and/or people respect because I don’t deem them to deserve it. I also don’t respect a lot of rules as an innovative thinker. In fact, I tell people I usually do things by learning the “standard” way first, then “hacking” what I deem isn’t “good enough” for my needs and/or liking. As much as I value respect, I have to admit I just don’t uphold it enough to call it an overarching value, as much as I know how many people might raise an eyebrow at the fact it’s absent, possibly made noticeable by the presence of love since there’s some popular expression about love and respect.

So that’s the general gist of a Life Strategy Map, if you wanted to try one. In the follow-up posts, I’ll write more about the details in mine, specifically, as well as details on what actions I will be (or have already started) taking, to use this Life Strategy Map for the next phase in my life.

Please note a Life Strategy Map isn’t meant as a one time commitment for the rest of your life. As the Designing Your Life course and book says, you should probably re-explore it every 2-3 years, and maybe even after life changing events. Aside from the latter, though, hopefully, in your future explorations, similar maps will result from your efforts rather than something completely different!