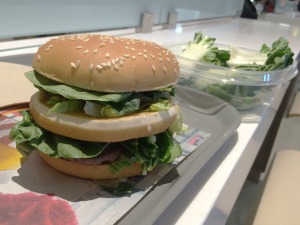 Chinese and other McDonald’s stores might want to take note of this Big Mac upgrade idea to put on their secret menu, Then publicize it so people can order it cause it’ll be better than anything else on their real or secret menu, hehehe. 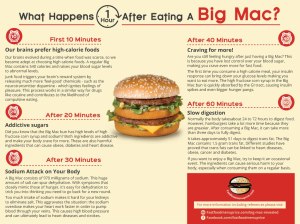 Big Macs aren’t great food for nutrition and healthy eating, that’s no secret. In fact, a recent infographic (at left) came out to show what one does to your body when consumed. Well, your body, maybe, but not mine. I don’t have any of those symptoms or impacts when I eat one. I won’t disagree a Big Mac is not great food, but I won’t judge anybody for eating one, either. I’d only recommend that if you can, upgrade it and make it healthier somehow. 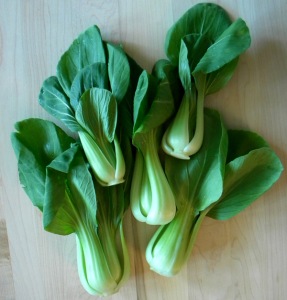 Recently, I’ve been adding bok choy or Chinese cabbage to my diet. It’s the second most nutrient dense fruit / vegetable among the powerhouse fruits and vegetable, next to watercress (US Center for Disease Control study). The latest thing I had the idea to add it to was the Big Mac burger from McDonald’s, shown in the picture at the start of this post.

The bok choy doesn’t really affect the flavour of the Big Mac. However, it adds a lot of crunch and makes the Big Mac seem that much more solid. The bok choy will help alleviate that hungry feeling soon after you have the Big Mac, as the infographic says, and it’ll give you a ton of nutrients, including lots of Vitamin C that will be great for your immune system and plant protein.

You’ll only need 2-4 leafs of bok choy, though the more the better, of course. My “Big Bok” picture had 4 leaves. That would cost you about 20 cents in Canadian dollars, with the stuff being available at common grocery stores and even Wal-mart! As a restaurant like McDonald’s, it’d be a total win if they were to add bok choy to their Big Mac and other burgers. They’ll just have to come up with their own clever names for the other bok choy upgraded burgers. 🙂

I was thinking of naming this upgraded Big Mac the Big Mok, but thought Mok would be thought of as “mock”, whereas I was serious about this! One could also claim it to be a little racist to mock the Chinese accent trying to say Big Mac, although I’m OK with that. Everybody’s a little bit racist, after all.

Of course, you can also add bok choy to other burgers from any other burger chains. You can even add it to sub sandwiches and other food, fast or not! It’s easy. Just wash the bok choy and carry it around in a container and add it to your meal!

Get a little creative and give it a try in some things you eat, especially the less healthy stuff, to upgrade it to something semi-healthy, at least!

Please click here to see my other posts on food on this site.