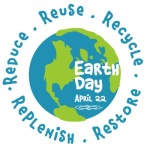 What are you going to do,
To keep sea and sky blue,
To reduce your C-O-2,
To be green the year through?

On Earth Day 2010, I pledged to eat “better” as my Earth Day goal for the year from that day.By “better”, I meant more local and more unprocessed foods, though I didn’t start out defining them that way, nor for the green reasons of food miles. Once I researched more and came to conclude food miles was a myth, though, I ate better for the economy and for my health. I’m sure it still has an environmental impact because I didn’t end up eating food grown in green houses here in the Canadian winter, that would have used up tonnes of excessive energy, but without being able to measure it, I couldn’t claim it for certain. One thing I am more certain, though, is that it saved me money not to be eating out so much as before given I don’t eat processed foods like frozen dinners that tend to be on the cheaper side, though I did eat more fast food than I should have.

However, I soon found out 50% was too easy to achieve, so I set a more ambitious goal at 66.7% or 2/3 of my groceries expenditures. It may not seem to be a large increase, but because what I got at the grocery store counted against my goal, going from 50% to 66.7% was essentially going from a 1:1 ratio to a 2:1 ratio. That is, if I spent $1 on groceries at the grocery store, instead of having to spend $1 at the farmers’ market initially, I would now have to spend $2. I couldn’t spend money just to buy food at the farmers’ market to get the ratio, of course. I had to eat it while wasting as little as I ever did, and I couldn’t spend on items just outrageous in price compared to similar things I could get at the grocery stores, like $4.50 for a dozen free range organic eggs when they were $2.30 or so in the grocery stores. I had to be a practical and typical consumer, in other words. That also meant I continued to eat processed foods like cereals, pastas, bread, etc. My staples were essentially all processed, including white rice that was minimally processed, but still processed.

As of today, one year after I had set my Earth Day 2010, I am proud to say I have achieved my farmers’ market expenditure goals at 66.9% of groceries money spent at the farmers’ market. I technically did not achieve it if you counted straight on money spent, but I had stocked up due to sales. I mean, why wait till the items were expensive again to buy when I could buy them cheap at the time of the sale, save money and just subtract out their totals of what I didn’t eat by Earth Day 2011?

As for what I ate that were made outside of Canada, I only have instant noodles and some Asian stir fry pastes for making stir fried rice. My spices are probably grown outside of Canada, but it doesn’t say that on the bottles. I also buy the occasional exotic tropical fruit. However, as long as their purchases leave me within my 66.7% farmers’ market grocery goal in the future, something I will keep tracking as my finances spreadsheet tracks it, I won’t feel guilty.

I have drastically reduced the amount of fast food I am eating now. That is in large part due to me getting routines together to make work lunches, when I most often ate fast food. This has not only saved me a lot of money, but made my diet so much better!

As for the pop, I no longer have Coke or other pop in my apartment. I only drink Coke now at work after nights when I didn’t sleep well and could use the caffeine and sugar, and occasionally at dinner with friends.

You can see more details of my Earth Day 2010 goal progress through a series of blog posts I did here.

Help me with 2011 Earth Day Pledges

Once again, I am looking to make an annual Earth Day goal to work towards making myself and my lifestyle more environmentally friendly during the year until next Earth Day. It has to be measurable to prove progress, and have an environmental benefit to be appropriate are really the only criteria I have. However, I am having a hard time figuring out such a goal this year because I’ve greened a good number of my life already!

So those are the ways I can think of right now where I am green. That’s a pretty impressive list, if I do say so myself! It’s one that’s a dunk on many others who go about bragging they’re green, I can tell you that!

However, in being so green already, I’m having a hard time coming up with something to pledge for Earth Day 2011 after all that other than to keep up my eating well habit gotten in the past year, and not having a net material possession weight gain as I did in the past two years. As said, I do not plan to be an extremist in greening my lifestyle so I won’t be committing to anything like 1 shower a week to save water. But what’s there left for me to do?

Can you suggest something to me?