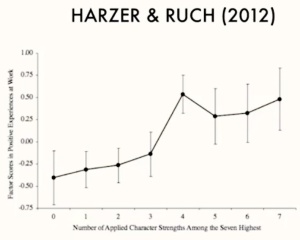 In the Science of Well-being course on Coursera, Professor Laurie Santos referenced a small study in 2012 called When the Job is a Calling, by Harzer & Ruch, that suggested those happiest at their jobs (in the sense of considering it a calling) were those who used 4 (up to 7) of their Signature Strengths (Top 5 or 7 Character Strengths). There were only 111 participants in that survey, which is hardly enough to be convincing for most people, even if the statistical derivations show there is “statistically significant” difference (i.e. on the graph, the thin vertical lines on the dot relating to 4 on the horizontal axis does not overlap those of dots for 3 or smaller). The mind just doesn’t buy into the math at some point, and just 111 participants is way below that point for me. Why they only had 111 participants is not known but I’d never publish anything with just that few numbers if it were only a matter of taking a survey rather than having to do heart surgeries!

END_OF_DOCUMENT_TOKEN_TO_BE_REPLACED

Yes, Mark Zuckerberg is only eating animals he kills himself these days! That’s his latest “personal challenge”, which, for context, have included things like learning Chinese in 2010 (continuing) and wearing a tie every day in 2009.

Mark’s reason for doing this?