The Quarterback (QB) Passer Rating System is a mathematical formula that gauges the performance of a quarterback over any period using stats over that period, whether a single game, series of games, year, career, etc. The scores in the rating system ranges from 0 to 158.3

I don’t know, but I’ll bet heavily on the two benchmarks in the system were the reason. A rating of 66.7 was deemed an “average” performance, while 100 was deemed “excellent”. The former, if you didn’t recognize it, is 2/3 of 100 or a mark you might expect on a report card of an “average” student. The latter may be perfection on a report card, but it’s close enough to “excellent” to call it that. That’s no coincidence these two benchmarks are such familiar numbers. Whatever the original math, I’m betting someone scaled things so they got these two benchmarks, and the casualty was the maximum, best, or perfect rating, or “base” in math, of 158.3, arguably the oddest “base” of any rating system I’ve ever seen. Think of bases for ratings like the thumbs up system (2), stars system (5), gymnastic or diving judge scores (10), report cards (100), and so on. None look anything like 158.3!

Why change the scaling base to 100?

I’ll give you seven great reasons I can think of right now, with more I’m sure I haven’t thought of, then explain them all.

Everybody is familiar with the 100 base, including people not good at math. You get all kinds of stats in percentages, which are out of 100. Your dollar has 100 cents in it, which also make some fractions familiar, like a quarter is 25 out of 100, and so on with money conversion. Your report cards, and most school marks might have a letter grades with them, but those letter grades correspond to ranges of marks that are percentages, or out of 100 base. In these ways, when you hear a passer rating of something like 78 (out of 100), you have an idea how close or far away it was from perfection in a way that you can make some quick and decent sense of it. Could you have gotten a similar idea if you heard a QB had a 123.5 rating in the current system out of 158.3? That’s the current system equivalent to the 78 out of 100 proposed.

2. You can drop the decimal to have shorter numbers

Until you compare very similar QB ratings in the 100 system I am proposing, you can drop the decimal. Do you really need to know if a QB’s passer rating for a game was 78.2 rather than just 78? In the 100 system, without decimals, ratings could also only have 2 digits max, not 3 or 4 in the current system, pending if you used the decimal. I’m eliminating the horrid performances of single digit ratings, of course, in this proposal, but there’d be room for that any time it happens.

3. You can use letter grades equivalents instead of numbers

If you want to make it even simpler, use a letter grade system even the kids are familiar with! The QB got a B+ rating for that 78 (out of 100) ratings game, adding the 78 numeric rating if you want to be more specific. You can also give QB report cards with a letter grade per game like each were a subject, which, in game film study, each team is like a subject unto its own.

How hard do you think it would be to explain the 100 base system to someone as compared to the 158.3 system? If you didn’t come to a clear answer, what about explaining it to kids? What about explaining a letter grade system to a kid to say a QB had a B+ game last night, if you didn’t even want to use that 78 rating? How old do you think a kid has to be to understand letter grades versus a 158.3 base system?

5. It’s way easier for commentators/writers to use

With all the examples of how much easier to use the 100 system would be compared to the 158.3 system, how much easier would it be for commentators and writers to reference QB ratings out of 100 rather than 158.3. They constantly alienate viewers, listeners, and readers, every time they start throwing out QB ratings beyond 100 where the first and most obvious questions would be, what is this thing measured out of if someone can get above 100, and what does that rating really mean then? Even if they knew the 158.3 base, getting context would be challenging unless they were familiar with other ratings they had memorized, but that’s a lot of work!

6. You can redefine the “average” and “excellent” benchmarks

Aside from ease of use in many ways, for the geeks and statisticians who can use any base easily enough, the most compelling reason to change the base to 100 is that it allows you to reset those “average” and “excellent” benchmarks that are now completely misleading. In 2017, the entire league’s QB rating (as if one QB played every snap a QB took), was 88.6 (in the 158.3 system). Given the “average” benchmark of 66.7 set in a time when passing wasn’t nearly as prolific as now, that mean the “average” QB in 2017 was pretty good since 88.6 is closer to 100 “excellent” than 66.7 “average”, where halfway between those benchmarks (83.3) could denote “good”. Surely, we can’t have all the QBs in the league averaging out to be “pretty good”, can we?

So what would the “average” score in the new QB system be? Coincidentally, the 88.6 out of 158.3 league average in 2017 would convert to 63.1 out of 100. That’s pretty close to the original 66.7 base that you could leave it at that since the league is still becoming more passing prolific. Using 63 as average basically leaves you with a small version of the same problem, that the “average” QB in the NFL would be better than average statistically already, that will only get worse in the next few years. If you didn’t want to use the decimal as suggested, you could use a round value of 65, or 67.

I don’t have as nice a suggestion for an “excellent” benchmark. However, if 66.7 in the 158.3 system became 88.6 now, then 100 should become at least 121.9 if the same gap were applied (21.9 increase for average), or 77 out of 100. For familiarity sake, and increasingly pass prolific direction of the NFL, I will suggest a score of 80 out of 100. That’s an A- letter grade, which takes one out of the B range associated with second rate, even if better than average, into some form of “excellence”. The 80 out of 100 translate to 126.6 in the 158.3 system for those familiar with that system. The 80 score will also make it a little harder to get an “excellent” game rating, so that excellence is not too easy to attain. It wouldn’t be all that “excellent” if too many people were reaching it often, would it?

Just for marketing sake, or maybe an omen to be considered, this named NFL 100 season would be a symbolic season to change the QB passer rating system from a base of 158.3 to 100.

Any more good reasons? Do you really need more?

I’ve named seven great reasons for converting to a 100 base QB passer rating system. I’m sure there are more. But really, do I need more given how great these reasons are? 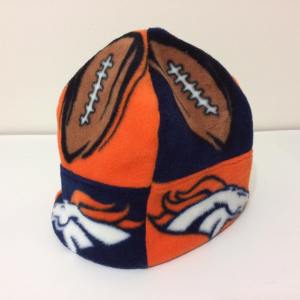 This tuque has 4 panels, unlike the CANADIANA tuque blogged about yesterday that had 5 panels. Due to the panel print of this fleece of the Denver Broncos, though, I had to make it in 12 pieces to get a design I liked, not 3 pieces like yesterday’s tuque, even though it could have been done with 1 piece as shown below. It doesn’t quite match the BRONCOS fleece jacket I made a few years back, due to me not having any of that fleece left, but it’ll still look cool together.

END_OF_DOCUMENT_TOKEN_TO_BE_REPLACED

I got 10 of 15 right last week. Not bad as it was 1 better than the Vegas odds gave and better than most of the ESPN expert picks.

Here are my Week 5 picks.

END_OF_DOCUMENT_TOKEN_TO_BE_REPLACED

Last week was a nice bounce back from the disastrous week 2 that most people would have had. I went 13-3 to stand at 32 correct for the season. That’d be 1 behind the lead among the ESPN analysts, who are only ahead of me due to remarkable weekly scores they had last week, which wouldn’t be typical of their past performance.

This week there are a handful of tough games to pick but I’m confident I’ll do well.

END_OF_DOCUMENT_TOKEN_TO_BE_REPLACED

OK. Last week was a slight disaster in terms of absolute results. Only got 7 of 16 games right. However, it’s not like the analysts at ESPN did better. I’m still tied with Tom Jackson in the lead at 19 rights and 13 wrongs overall. Best strategy last week would have been just to bet straight up home teams cause 10 of the 16 home teams won. That was better than anybody in my pool and anybody at ESPN.