Here were the first, second and third sets of seven songs I had shared.

Below is the fourth and final set of seven great love songs I shared, with some short commentary for each. Actually, for the Februaries with 29 days, I’ve included a bonus song.

END_OF_DOCUMENT_TOKEN_TO_BE_REPLACED

Below is the third set of seven great love songs I shared, with some short commentary for each.

END_OF_DOCUMENT_TOKEN_TO_BE_REPLACED

The first seven songs I had shared can be found through this link.

Below is the second set of seven great love songs of my list and some short commentary with each.

END_OF_DOCUMENT_TOKEN_TO_BE_REPLACED

Daniel J. Levitin wrote an absolutely brilliant book called The World in Six Songs, supported by a great website with the many music samples referenced, among other great related material.

My basic paraphrasing of the concept is this. All the songs in the world could be fit into at least one of six categories providing an evolutionary benefit to humanity, often ultimately tied to our social nature.

The book and website offer far more detailed interpretations, of course, but I will expand on my paraphrasing with each post and the associated topic. 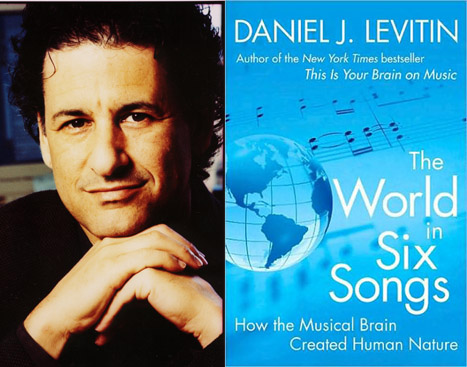 In a series of posts, I will describe each of the six categories in brief, one at a time:

I will describe what the categories are about because they are not as limited in scope as the category names suggest. I will then supply one of my choices and ask all readers to do the same if they so wish. In the seventh post of the series, I will offer the chance to put the song choices all together so readers can read the entire set on one post. I do this because it would be a long post to describe all six categories at once, but to have all the answers in one place might be nice.

July 30th add-on in italics, from Dan Levitin in a summary article
Historically, songs have been used to transmit various information such as religious texts, survival and life lessons, and even the ABCs. Studies have shown information set to song is memorized more reliably than when simple rote memory is used. Increasing the reliability of transmitted information provides the next generation with valuable information.

Songs of knowledge are aptly named because they preserve and spread knowledge. However, it’s not that simple since we have language, which is a far more versatile means of conveying and preserving language than music, having far fewer limitations in composition. Language, though, doesn’t have nearly the mnemonic power of music to help preserve the knowledge being conveyed. This was of great value before we had written language, though it should be pointed out that Daniel Levitin did not pick sides whether the musical or linguistic brain came first. Rather, he favoured the likely to be correct idea they developed together. Another limitation of language is that it can be too specific.

For difficult or awkward situations, a little ambiguity afforded by songs might actually help dissolve conflict, or at least manage social uncertainty, benefiting survival. Songs are also more genuine because it is partly an emotional output, not a rational one, and not as easily to fake.

Finally, knowledge songs are performed by many people, and often. That is partly how they are maintained as per oral history. You can neither preserve nor spread songs if only one person knew it and/or it were rarely performed. Too risky to lose those songs and their knowledge forever. These songs are also sometimes sung in groups, which helps identify those who can bond into groups that increase chances of survival and promote evolution.

As for some examples, many kids’ songs like those which teach counting and the alphabets are excellent, albeit simple examples of knowledge songs. With English as my primary language, the Alphabet Song comes to mind.

This is the same tune as Twinkle, Twinkle, Little Star by the way, although the latter helps teach things like rhyme rather than an alphabetical sequence… kind of like the video link demonstrates hilariously.

However, on the other end of the spectrum is the Oral Torah, which, as a Christian metaphor if you are not familiar with it, is a bit like reciting the Bible by memory by song. That’s not entirely accurate, with the history of the Oral Torah being very interesting compared to the written Torah, but you get the idea. Despite the religious text, though, the “song” is meant to preserve and spread knowledge. Religious songs, covered next, are more about rituals. Finally, in the middle are songs like those sang by traveling minstrels and pop songs that tell of historical events like Gordon Lightfoot’s The Wreck of the Edmund Fitzgerald.

Audio sample of songs from the Knowledge chapter in The World in Six Songs can be found on the website. No direct link was available, but click on the Songs menu option and appropriate page number range link carrying pages 137 to 188. Please note that not all songs are meant as samples of Knowledge songs. Some are just referenced material in the book text.

Daniel Levitin talks more about the impact of songs in our lives, including songs of knowledge, in this video below.

My choice for Song of Knowledge is

This was a really tough one for me to answer because I don’t live in a place and time of traveling minstrels and some choices I had thought about were covered (Wreck of the Edmund Fitzgerald). However, after thinking long and hard, I decided on my choice above. While not a full historical account by any means, Joni at least wasn’t there like most of the minstrel singers would not have been at the events about which they sang.

What is your choice for Song of Knowledge?

Lyrics and YouTube/audio link would greatly enhance your answer so readers can know more about your choice. They are not necessary, though, and not possible if no lyrics or version exist.

You can include songs you wrote as a choice, too!