If you were a runner, you should stop reading this and just accept my apology for having planted the thought in your head. It’s a terrible thought to have on your mind while you’re running, and even if you were not, so please try to get it out as soon as you can. However, it’s an interesting way to look at one aspect of one’s running, the cost of running shoes per km or per mile ran from what you paid for them, and what you got out of them if you tracked it (or have something like a Garmin and Strava app track it for you). You can get the final answer in the end, but probably an estimate from experience and/or history if you’ve been running for long. It’s an interesting thought, but not a pleasant one if every time your Garmin or fitness watch buzzes or beeps for a km or mile, you’re basically putting money in a toll machine based on your calculation!

Not surprisingly, the math isn’t hard to do. Take the cost of your new shoes, or current shoes, tax included, and divide by how much distance you think you’ll get out of them, in miles or km, and you get a “toll” you’d pay per mile or km every time you run one. Then, you can figure out your run costs like if your rate were 25 cents per km, then a 10 km run would be $2.50. Simple, right? Yes. But awful to have money and costs on your mind while you run. If you do, though, just keep in mind that this cost only occurs if you got your running shoes free and paid for them by usage.

Now why would I suddenly have thought of this terrible concept, you might ask? Well, that’s because from the pandemic, I hadn’t been able to go down to the US from where I live in Canada each year, to find old model runners on clearance, and stock up on ones I like for relatively dirt cheap prices compared to real running shoes. I’m talking about $60 US or $80 Cdn per pair with taxes included. That wasn’t much as it were, but even less when you consider I tend to force retire my shoes at 1000 miles or 1600 km! The km or even mile rate was really spare change!

Suddenly, this year, I had to get current shoes at current prices, in part because I can’t just run in any old shoes as most runners can’t. Suddenly, I’m looking at $160 to $190 for a pair of shoes, one of which barely lasted me 1000 km before I was forced to abandon it for being a lousy upgrade to a shoe I had run with for a decade! That would be the adidas adizero 9 from some great predecessors. I had 3 pairs of the adizero 6, for example. Suddenly, the per km or mile toll consideration was real! No longer would I be flicking 8 cents per mile or a nickel per km, or 6 cents per mile and 4 cents per km roughly, on the low end. Now, I was paying over a quarter per mile or 16 cents per km if future shoes were like that last shoe! That’d be a lot of change to be hauling around on a 20 mile or 32 km long run, or longer runs and marathons!

As of today, I got a pair of Saucony Kinvara 12 women’s model I need to fit my small feet, that at least look and feel beautiful! It’s actually the most beautiful running shoe I’ve seen and had, minus the pink laces I swapped out Small comfort for the $161 sticker price (tax included) I just slapped with, I guess. Its softness may mean it won’t last to lose traction it has, and that I might have to file out some grooves to make it last longer, but we’ll see. It’s also the lightest shoe I’ve ever had by a small, but noticeable margin, of almost an ounce! Now I just have to ease into it because my ankles aren’t used to running on such a mattress. 🙂 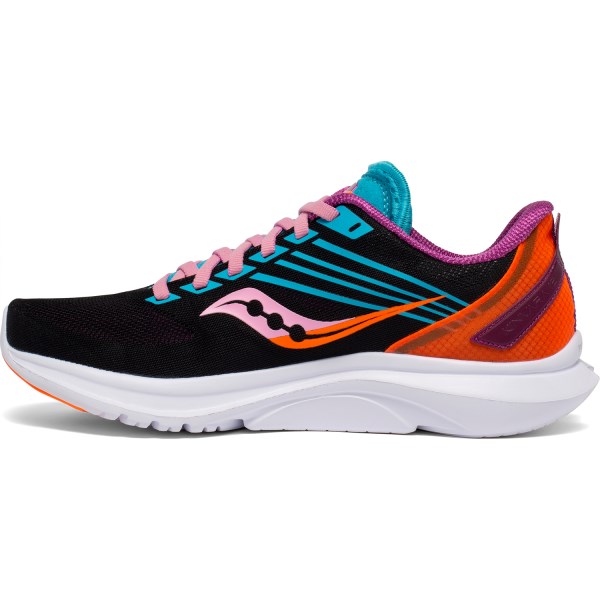 Soon after, I will then be getting the Hoka Mach 4 at $184. This one is also pretty colourful and super light and bouncy. It was my preferred new shoes but I couldn’t get it for exchange where I had traded back in an extra pair of adizero 9s that I had.  I always have two pairs to swap back and forth for different purposes and feel, and should I get a blister in one, I can avoid rubbing it as much in another pair. We’ll see how that feels for mileage to get out of it. I think if I can do the filing to keep some grooves for traction on both shoes, they’ll be able to handle the 1000 miles retirement limit I had for so many past pairs of shoes that didn’t feel as soft, but that might be why they also last longer. We’ll see, and we’ll see what price I’ll be paying per mile or km in the end. For now, though, I’ll just try to keep it off my mind when I’m running with faster times I’ll be clocking in them compare to crappy shoes I’ve had for the past year and a half. One run and I saw it already!