Just when I thought I had covered all the changes I’ve been making in my life over the past few weeks, and in the upcoming few weeks, I’ve decided to take up a few more! These came my way and after a little analysis, I’ve decided to try or embrace them! Which depends on how new they are to me compared to what I’ve experienced before.

I’ve generally not been one for audiobooks. For studying them, which I tend to do with highlighted passages, notes, and such, even when reading for pleasure, they’re not terribly useful for that. However, since I’ve begun to read more books this year relative to others, most of which are exploratory for my writing rather than more serious study for personal interest, I had decided not to buy the books but rather borrow them from the library, e-books or real books. To my surprise, when I searched a lot of them, there were a lot of audiobooks more readily available than the e-books or real books. I guess people in Halifax, Nova Scotia, aren’t generally all that keen on audiobooks, either. Not wanting to wait for a few of those books, I thought I’d give them a try. After all, I do listen to a lot of long form podcasts now that lasts about 1-2 hours apiece. An audiobook would just be like a series of related podcasts, a serial, I think they call it. At least that was the theory. Happily, this one worked out well to be like I had imagined it to be, and I am now on my third audiobook, Open, by Andre Agassi. The previous two included Green Lights, by Matthew McConaughey that was just awesome, and What I Talk About When I Talk About Running, by Huraki Murakami. There are many more to come, though the length of some scares me. I see Barack Obama’s new book is 29 hours!!! 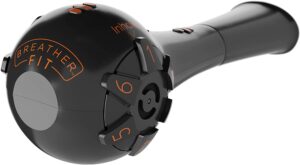 I hope to have a separate post about this in the near future, but I had been thinking about working to make my lungs stronger for my running. I had been thinking more about it in the sense of breathing exercises that people needing lung muscles do, like free divers. Little did I know, there are lung training tools, for athletes and those with respiratory challenges! While I was in the midst of making all these changes, I figured it wasn’t too expensive, and seems to have some science behind it that it’s not harmful, then why not since it aligned with my goals? I’ll report back in September, after about four months, unless my new running style causes me injury or something, though I should still be able to work on my lung exercises. I just wouldn’t have the chance to test my lungs to see some of the benefits when the lungs are under stress of high cardio activity.

There was just one creepy thing about all this. I was telling a new friend about lung training while getting an impromptu ride home from a running practice that ran late. When I got home, Facebook was showing me these ads with a different brand of lung trainers! I didn’t even have any electronics on me for the big data collectors to spy on me so it must have been through her electronics! That’s way too far reaching to be spying, Facebook! But thanks for the suggestion. I bought a much different one than the one advertised to benefit its competitor! 😉

I’m in the midst of a handful of deadlines for writing competitions that started May 1st (why I missed a day of blogging). Outside of a batch of four 300 word submissions, the next ones are up to 2500, 4000, and 5000 words. All due by May 5th. I had been working on them over the past few weeks, but for some reason, it’s going to take the crunch of the deadline for me to get them to where I need to get them before feeling good enough about them to commit the entry fee to enter them. I may not place, or even come close, but that doesn’t mean I’m going to just throw money away and enter something I feel is still in crap status, just for the sake of doing so! Recent and upcoming investments in running gear as I fully commit to a new phase of running in my life show I have good reasons to keep money from these writing contest entry fees for other things that I know will definitely be useful to me! We’ll see how these stories work out.

I’m pushing my luck here. I finally decided to take up the Amazon Prime offer with some recent orders to get them a few days sooner. I had made myself wait for a few weeks to get my writing assignments mostly done. To get it as soon as possible after they will be done on May 5th, I ordered on the weekend, and the shipping was a little slower than I had hoped, so I took the Amazon Prime free trial. How much will I make use of this? Probably not likely. I see I can get an e-book for free, and that might be all I might use for it. I have no time for its TV and such, but a free e-book I can’t get at the library is all right. I’ll cancel it long before the 30 days is over. But it is a change, given I’ve only rejected it for a decade or so now?