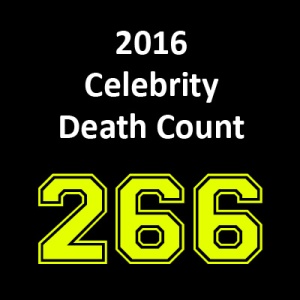 This is one of the most comprehensive lists found online, within reason of who counts as a celebrity. This list is fairly comprehensive because I had compiled it from a half a dozen fairly comprehensive lists from major sources like NBC, the BBC and so on. My list also has brief bios, death dates (in chronological order) and age at death. There are a few hours left in 2016 where I live but I’m not going to wait till 2017 to post this. I’ll just make any additions needed when I find out, or if you tell me about it.

Sad as this list is to see, you should have enjoyed 2016 for celebrity deaths while you could have. It’ll only get worse due to how many more people we can know these days compared to way back when there was no social media, Internet or even television! See full reasons here. CNN says it wasn’t the worst year by some high threshold of “celebrity”, that was edged out by 2006, but you can judge for yourself. 2016 might not have been worst but it certainly felt that way due to social media… which is exactly what I was talking about. Just on media and the dawning of the Internet, though, I foresaw this in 1995 as noted in this poem.