Ah, men’s dress pants. What can be done with them for design without getting disapproving looks for “unprofessionalism”? Not much, really. Even a stripe down the side or something makes them athletic and too casual. Flashy colours makes you look like you’re going dancing, even if it’s a hip look. Colour block you look like you’re going out dancing or for a fashion show. Even jacquard style tone on tone is regarded as being a bit much by some. So what can one do?

After thinking a bit about these things, I concluded that solid colours were the only realistic option I had. Men do wear dress pant colours other than black and navy, even if they were generally muted like green, yellow, even purple. I have those myself, but would have to expand beyond them if I were to wear pants in colours other than black to go with high contrast, multi-coloured tops I will be making. Those would be tunic styled, with Mandarin collar and white/light yokes to separate the other colour blocks. With my current dress pants besides black, I had the opposite problem of the hipster and metro looks which I rather dislike. I don’t like those looks because it’s flashy pants colours with a boring top, like plaid, that seems an after thought and necessity to cover one’s upper body with something. My non-black dress pants were going to make it look like I had to just find anything to cover my lower body and didn’t care what.

Those bright tops were my pass to being able to wear bright coloured dress pants. If done right, I could wear any pant colour I like so long as they fit into the colour scheme of a top. For example, if I had a royal blue body dress shirt, with white yokes and Mandarin collar at top, royal blue sleeves and white cuffs, accentuated with an orange stripe at the bottom of the yokes and where white meets blue on the cuffs. I would have a royal blue, white and orange top. Think Florida Gators or Denver Broncos colours. I could wear white, royal blue or orange pants and it would look like it belonged to a uniform!

Uniform, that’s the magic word to why this look would work. The pants would look like they’re part of a uniform, so as long as the colour is either already present in the top, or goes with it in some other way, it would work. I can see an intense bright green (not fluorescent) also going with the blue, white and orange, because green, white and orange is also a nice colour combination. Next to the dark royal blue at the bottom of the top, light green pants would look just fine.

As for the “professional” look, let’s put it this way. The top looks like a military jacket in cut (not colours). There are sharp lines, colour contrast, and the top will fit me beautifully without wrinkles you see on most men’s shirts when they wear them. I’m going to look sharper than most of the people in the office, including most with suits and ties! I might look like I belong on a star ship more than an office, but that’s a pretty serious atmosphere. More serious than in an office, that’s for sure!

With this wardrobe design in mind, I set out to make a whole bunch of pants from various colour fabrics I had in my stash. I tried to stick to the basic rainbow colours, with some hues like light and dark blues, whites and black… because I only have one pair of black dress pants and a guy could always use more than one. What I ended up with was a dozen pair of pants below. They’re all lined with shirting for a smooth feel on the skin and warmth during winter, cause those polyester dress pants I have sure suck to walk outside in during winter! They are also “pajama” style because the tunic tops cover the waist band that don’t need to be sharp with belt hooks, and I don’t care for the hassle of sewing fly zippers. Those pants are not only weaker for durability than mine, but I can also get my junk in and out of these things far faster than any guy can in those pants! I design for practicality just as much as for fashion! 🙂

Not bad for a month’s work. Now on to the dress shirts! I’ll be posting those one by one cause each will be nice in its own ways.

I’ll give this collection a silver rating because they are nice and versatile. Just a bit plain and boring aside from some of the colours that is only part of the collection.

Please click here to see other fashion related posts and garments I’ve made. 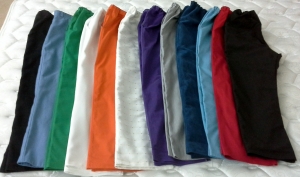