Being trendy is for those who follow,
which explains its mass appeal 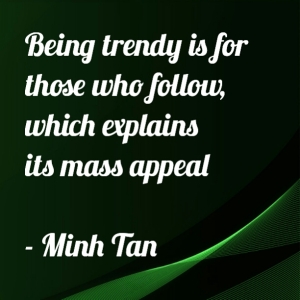 Most people are followers, I don’t think too many people agree with that. Being trendy is about doing what everybody else is doing or you think is going to be doing. Either way, though, it’s not like you’d be the first to start it. Somebody has to be the first, sure, but at that time, it’s not trendy. It’s new, innovative, maybe even strange. By the time you get on board to a trend, you’re already following.

And because most people are followers rather than leaders, that’s why being trendy has mass appeal. It suits most of us. That said, being trendy allows some people to think they’re leaders, by being among the first of those they know to take on a trend. However, it’s just local disillusionment. They’re still following. Just that among their local crowd, they might be the first. How much or little of a follower they are can probably be determined by how “correct” they are in being trendy over time.

What will become trendy is very difficult to predict. If it were easy, everybody would be trendy! Some things that seem to be trendy, or have potential to be, will succeed, while others will fail miserably. The opposite is also true. How many trendy things have you seen that you just can’t even start to wrap your mind around as to why it is trendy?

If someone you think of as being trendy is “right”, “all” the time, they either didn’t get on board the trains soon enough, and/or have a lot of taste similar to yours. That’s not to say it’s all “good” taste, just similar to yours. If someone were “early” enough on every trend out there, they will inevitably be on board with some trends that will flop miserably and be good for stories over drinks about how when they embraced this or that and was just silly, snobby, or whatever for it.

But they’d still be a follower. 🙂