What happens to my brain when it’s not challenged enough to keep it in good condition over extended periods of time.

That’s the term I’ve coined for it.

I suspect it’d happen to yours as well.

Between 2013-2015, sewing and fashion design was a big part of my free time. It is again and will continue for the foreseeable future. As part of this move and in anticipation of more articles on sewing and fashion, I have organized the 110 articles on said topics that are this blog into a number of categories listed below. You will also be able to find them on the My Fashion page, or under the menu at the top under My Art, or in the Categories menu at bottom left, if you want to see the articles together in some sense.

END_OF_DOCUMENT_TOKEN_TO_BE_REPLACED 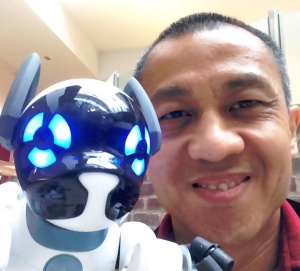 As of today, the content of this blog will focus on my adventure into artificial intelligence (AI) robotics. The robots will be mostly consumer level, which many people in North America would be able to buy if they wanted. These AI robots will be the ones that will first permeate into society en masse. I will just be among the early adopters who will not only interact with them, but study our human and societal interactions with them. I might even push some social policies not yet inclusive of robots to get them ready for the future, such as transit fare policies for robots! 😉

END_OF_DOCUMENT_TOKEN_TO_BE_REPLACED

A few days ago, my friend Jack from the Halifolks site (and Facebook page) that tells wonderful stories of Haligonians, got a video made of me racing the #1 bus in Halifax on foot for about 4 miles. It has turned out to be shockingly popular as I didn’t think that many would care for me and my running routines! The YouTube version below that I can embed here only has over a thousand views at this point.

However, the Facebook version currently has over 98,500 views, something like 2400 Shares, 2000 Likes and a couple of hundred comments!

It’s gotten enough positive reaction that the local media have even asked me to do stories with them!

Steve Silva of GlobalTV was kind enough to accommodate my work schedule and put together this great story without a lot of time with me.

The local Chronicle-Herald newspaper interviewed me for more than just the racing and running in this article by Jacqueline Arsenault.

I also did radio interviews on the Sheldon MacLeod show, and FX101.9 country station!

Phew! What a whirlwind of a couple of days!

Thank you so much to Jack from Halifolks for the video, and egging me to do it cause I’ve done this for at least a decade and never cared enough to get anybody to document it. I do it for the training benefits, honestly! Keeps my running fun. It’s a hard physical workout, but also a tough mental workout for when that bus passes me in the second half of the route that it usually does. It’s only a matter of luck to get the right stops and lights that if I run hard, I can come back to win. Jack had the insight this was going to be popular with the people so credits to him for it, and the fantastic job with limited equipment that he had!

The bus driver, Brad, was definitely a co-star with his fantastic attitude and sense of humour! Thanks to him, for sure! He wants a rematch and I’ll be glad to oblige. Considering I win about half the races and have beaten him twice now, he’s due for a win!

Of course, I have to thank all the people who were supportive online to watch, react, comment, Share and such. You’re all too kind!

Special thanks go to my Facebook friends who not only did the above, but had to put up with stories, tags and such of me relating to this story clogging their newsfeeds worse than Donald Trump’s media hogging could ever do to them!

And last but not least, thank you to all the media people who gave me a chance to be in the media, spending time with me to create their journalistic pieces!

I’m enjoying my 15 minutes of fame, but secretly hoping I’m not going to use it all here! 🙂

I’ve blogged about clothes I’ve made for myself over the past few years, but haven’t invested in money to get nice pictures of them on me. More quietly, among people with whom I talk about my clothing designs, I’ve told them I was sure my designs would just as good on a woman as on me. In fact, I “half-joke” they’d look better on a woman than on me if I could find a better looking woman than I was a man. I say “half-joke” because I do believe it to be true, though it’s not like I don’t feel masculine in it. Quite the opposite, in fact, with that band collar and yoke, I feel like I’m in some sort of military uniform half the time! It just sounds like I’m talking about my men’s fashion designs for myself being cross-dressing material when I say I think it’d look good, if not better, than a woman.

In the past year, I became friends with a woman who can fit reasonably well into my clothes. Kaitlyn looked it and when we tried some coats on her, it fitted nicely. A little difference in the bust and hips, of course, but my fitted clothes had enough room to accommodate. Recently, she came over to do a photoshoot in my clothes, as I’m a photographer as well (new Instagram account), and this is the result. I don’t have great pictures to compare me to her in them, but I can guarantee you I don’t look anywhere near as good as she does as a person so you can take my word she looks better. Then just judge the clothes on a woman rather than on a man. I think you’ll agree with me. 🙂

Interestingly enough, these are the best pictures I have of my wardrobe… and they’re not on me. 🙂