If you can’t be friends, at least try to be frenemies 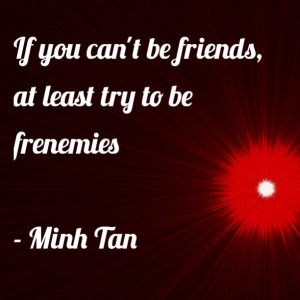 Frenemy is a concept probably not familiar to a lot of people, even if they know the words used to make the portmanteau. I mean, how can you be friends and enemies either at the same time, or flip flop back and forth? Well, think of people who have off and on relationships, for starters. I’m not familiar with that because it’s not how I operate, but for me, a tough competitive adversary I can respect fits the frenemy definition well. It could be sports, games, schools, or more seriously, jobs. More commonly, Parents who live through their kids.

Regardless, here’s the basic concept behind the quote, though. It’s that you can be friends some of the time, which, to me, is better than none of the time. Find occasions to put aside your differences and just enjoy those moments in life together. Hey, soldiers during World War I stopped and celebrated Christmas in the trenches when they were trying to kill each other in the nastiest of ways at all other times during the year! If they could do that, surely you can put whatever differences you might have with an enemy and be a frenemy with them, can’t you? 🙂