Common sense is anything but common 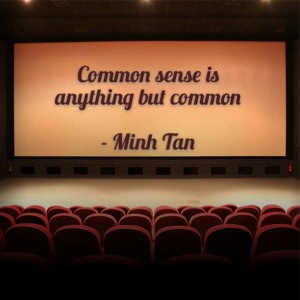 This is the life philosophy, and saying, which I have had the longest. Ever since I was told of the expression in late elementary school, and what it meant, I had a little reaction to it like good sensibility isn’t common. I didn’t think in terms of the word “sensibility”, but of the concept that most people could meet a decent standard of sensibility. I don’t know why I had such doubts in the human race, but I regrettably have to say I feel I was more right than wrong. Either that or the standard for common sense would have to be pretty low. This ranges from big stupid things like war and abuses of religion, to small things like etiquette on how to treat people.

I got sick of hearing about common sense by junior high and it was among those years I came up with this as a rebuttal. For politeness and common sense’s sake, though, I mostly kept that rebuttal to myself in my thoughts. 🙂