Facebook had given users a “See First” option in July to let users determine what they want to see first from their Facebook “friends” rather than having to rely on Facebook algorithms. Or perhaps who to stalk, depending on the user and user intent that can always warp even the best of well-intended matters.

It’s a little harder to stalk on Pinterest given the lack of social bonding between most users with the way it’s used. People just follow others, in full or in part of select boards only. You have to make an effort to get to know somebody rather than just pictures of whatever they care about posted in your feed. There’s hardly any commenting done by most. You might as well be ordering pins related to themes, which you can rather than follow people, and have to put up with on the Picked for you feature Pinterest has. If they haven’t allowed an opt out to that, they should, but I’m here to talk about something else.

END_OF_DOCUMENT_TOKEN_TO_BE_REPLACED

See the good in others like you would at their funeral 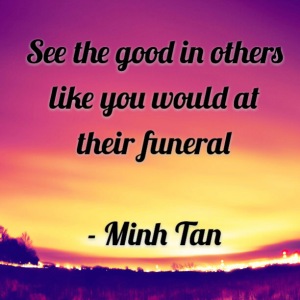 END_OF_DOCUMENT_TOKEN_TO_BE_REPLACED

Facebook has a new feature for its users. It’s called the Year in Review, and it features your Top 20 Moments from some algorithm Facebook generates from your profile. You may have seen it, or not have it yet, as it seems to be a gradual rollout. So look for it if you have not!

Just go to your profile. On the right hand side of where your wall starts, there should be a “2012” graphic and link to click on to see your top moments from 2012. A whole page is dedicated to it!

END_OF_DOCUMENT_TOKEN_TO_BE_REPLACED

Mikael Granlund, a 19 year old hockey player from Finland drafted 9th overall last year by the Minnesota Wild, just scored what may well be the play of the year on Friday the 13th of May, 2011!

On the IIHF World Championship semi-final stage against the Russians, at full speed stealing the puck in the corner, then walking around a player, then having that player chase him behind the net, Mikael scoops up the puck and puts it up and under the crossbar. He scored “lacrosse style”, as some like to say, to give Finland a 1-0 lead. But never mind my description. Have a look for yourself because words don’t do this goal justice!

END_OF_DOCUMENT_TOKEN_TO_BE_REPLACED

In the US Open 2009 semi-finals between Roger Federer, this was the point that set up match point for Roger Federer against Novak Djokovic. WOW!

Some people called this the best shot ever. I’ll just call this “The Shot”. Dick Enberg and John McEnroe were making the call.

I was out of my seat, landing just as the ball landing in and pumping my fist, giving Roger a standing O in my living room.

The only thing better would have been that Roger won the match or championship on such a point, but it’s plenty good any old time!

p.s. You’ve got to love how fast this stuff gets on YouTube. I estimated less than 5 minutes!