I recently came across some fantastic information on origami (paper folding) like this mind blowing talk from Robert Lang.

In it, he talks about crease patterns, which are mostly square pieces of paper with all the creases required to make an origami drawn on to it. For example, this crease pattern

By chance, I had also come across some hip quilt patterns in that they weren’t square in their pieces, like this, 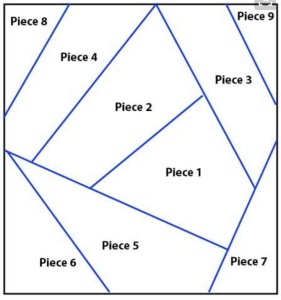 and thought they were similar to some crease patterns.

So I put the two together and ask why can’t someone make an origami crease pattern quilt?

That is, make a quilt where the pieces are determined by an origami crease pattern, that theoretically can be folded into the origami piece? Or from the example above, pretend that crease pattern is the quilt block shown. It’d be an interesting symbolic and somewhat abstract design. You could show it with the origami it could fold into.

And if you were more ambitious, since making one if pretty ambitious, make two and actually fold one!

As for where to find crease patterns, Robert Lang has developed a ton via this link on his site. Most are pretty complex, though, and some not square, so may be not practical for all but the most advanced of quilters. Making many of his origami is a big challenge on its own just to have something to show.

These seem a bit easier, some of them.

Or just start out with something simple and popular, like

that folds into this flapping crane.

Basically, imagine this bird where each block defined by all the fold is of a different fabric!

Who wants to take up the challenge? 🙂

2 thoughts on “An Origami Crease Pattern Quilt, or Origami Quilt?”