Natural abilities are just skills
that come more easily to some,
but that can be learned by others 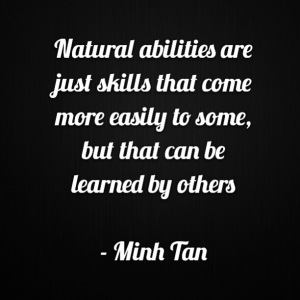 A lot of times when people wow at others who have natural abilities like those in athletics, singing, arts and such, they don’t think they can do it. Some mean they can’t do it as well. Many mean they can’t do it at all. That’s too bad because most of the things people do in life are skills that can be learned by anybody. That can be anything from athletics to math to singing, whatever. I mean how do you think those that do it learned?

I guess that was a loaded question. Many had to learn it like anyone else. Many aren’t naturals at it, either. Getting to the top will require some natural talent, sure, but being decent or good at something doesn’t require a lot of natural talent. It’s more persistence and determination to learn and keep at it. In fact, having a lot of natural talent becomes a detriment at some point because it’s too easy and when things get tough, some of those naturally talented people just pack up rather than get going. How many athletes do you think you can find that fits this description? Singers? Students? Tons!

So the next time you think you can’t do some of these “mythical” things that seems to require natural talent, throw that thought out the window and look to learn it. Be patient and determined and you’ll be fine!