A romance completely understandable
is not the truest of romances 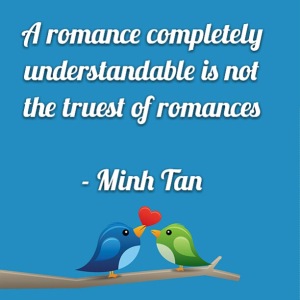 Along the lines of my previously posted quote about how love isn’t logical so don’t try to understand it, the inverse is that if a love made all the sense in the world, then it isn’t the truest of love. That would be a logical match a computer could put together. There’s no “magic” or “mystery” in it, if you will.

Put it another way, if all the true romances were so understandable, there wouldn’t be many (or any) situations where the Parents can’t understand what their child sees in their chosen partner. There probably wouldn’t be nearly as many problems with in-laws, either. If you start out thinking someone is an idiot, and just somehow pulled the veil over your smart child’s eyes in making him/her fall in love with them, you’re not likely to get along with them at any decent level any time soon.

I often hear people say of some couples of how the two are “perfect for each other”. In such a case, I just hope they’re naively right in that the two people are perfect for each other, but not because of how those deeming so think. I hope they see enough to take that guess rather than actually know everything in making that determination. That’s because logical match-ups just aren’t all that fun when it’s that obvious. No mystery. No discovery. No magic. Might as well have had it arranged.