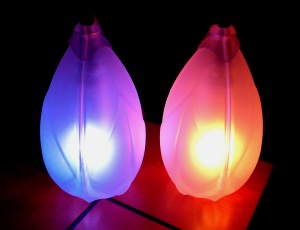 I just completed my first night run with podpoi in hand (see pic at right). They’re the size of large grenades in my hands for scaling purposes, and rather bright! It was a rather fun experience I thought I’d document, with the music in the video at top being typical of what I was listening to for my 10 mile run.

First, these things are relatively new on the market. Not a lot of the general public knows what they are. Those that do probably associate them with poi spinning, not like glowing things somebody carries in their hands while running. I’ll learn to run and spin later, but just wanted to go running with them tonight.

Out of context, or unknown to people, my podpoi sure got a LOT of looks! I could see people’s eyes on them, or people in cars, across the street and so on, pointing to them. Kids were definitely excited by them! I swear, an attention whore could not have been more satisfied running with these things at night!

But it was what else I did with them that made my run memorable!

I ran through busy parts of the city with lots of people and traffic, and their eyes were practically all on the podpoi that glowed and gradually changed colours every few seconds. They never stayed the same colour, basically. A few drivers, as to be expected, veered their vehicles slightly looking at me with the podpoi, driving where they were looking. No accidents were caused, though.

I also ran through some urban green space at its edge, where it was very dark. That was just awesome to have had my own lights that was bright enough to show me the way. I also ran through some industrial areas of the dockyards and some piers, where there were LED poles that changed colours like my podpoi. I felt right at home. 🙂

I ran by a few parties on the porch, where I lifted one podpoi like a drink toast when they saw me, and gestured to drink from it. At another one where they thought it was “faggy”, I took them both in my hand and held them with my ring and baby finger at the cord from the top. I stuck my pointing and middle finger in front between them and moved them to my crotch, and danced with the biggest glowing testicles those boys had ever seen, lol. Probably not the most ambassadorial move for podpoi, but that’s OK. They didn’t know what those things were. 🙂

Along the waterfront, I ran by a lot of restaurants where I waved to the people inside with my glowing podpoi. Some waved back. Most were just surprised, not knowing what the heck they were.

Then I saw the ferry crossing the harbour, so I went to the tip of Purdy’s Wharf, put the podpoi on fast flash mode, and started making shapes and letters to it. I don’t know if they saw it, but it’d have been hard to miss cause I saw my podpoi reflection in the ferry window at one point, even half way across the harbour. Those podpoi are definitely bright! I drew out HI in all caps, did the I ❤ U gesture, and drew out a smiley.

I continued on and went over the 1 mile long suspension bridge between Halifax and Dartmouth, knowing I would stand out very visibly on the bridge with my podpoi. The bridge goes over the Canadian Naval Dockyards, at which time I thought it’d be fun to make signal down towards some of the ships and warehouses, as if I had a spy accomplice there, lol. Funny idea, except that base had been embarrassed not too long ago with a spy case of Jeffrey Delisle, so that could have been a bad situation. I doubt they’d take some guy with two lights in hand making funny gestures downward, and acting like communication was taking place in return. 🙂

Finally, I went through some bad hood to get home. Dressed in an emerald green jacket, with silver snakeskin running tights I made myself, a hat and podpoi in hand, I felt like that Green Goblin super villain with bombs in hand. They’d have been smart to leave me alone. No real threat, though, and I finished just fine. Well, mostly fine. Those podpoi are just 136 grams or 0.3 lbs each. However, you carry them in hand to have to hold them, and lift them about 15000 times during a 10 mile run, without training, and you’ll feel it a bit. Not much, but I can definitely feel it.

But what a run! There’ll be plenty more. And next time, I might learn some Morse code to signal down to the naval dockyard from the bridge. I just won’t spell out anything discernible. Spies don’t do such obvious things, silly! 😉

Eventually, I hope to learn to run while spinning podpoi. That’ll be a show all its own! 🙂