If you’ve been on Facebook, you’ve probably seen these status posts. Some preamble of cause and/or condition, out of all my family and friends, I’m going to bet that less than X will take the time to put this on their wall to help cause or condition in preamble. So surprise me and prove me wrong! Really, people? I have no problem with your cause or condition, but do you really think doing something like this will leaving you feeling better for it all? Because if not, why do it? So let’s explore if you might end up feeling better for it.

END_OF_DOCUMENT_TOKEN_TO_BE_REPLACED

I saw the original image on Stan Lee’s Facebook page, without Dennis the Menace. I felt it had potential for a double meaning so I added Dennis via some image from which I cropped him. I couldn’t post it as a reply on Stan Lee’s page so I figured I’d put it on my site instead.

The Bergen Facebook Addiction Test was developed by Cecilie Schou Andreassen, Doctor of Psychology and head of the Facebook Addiction study at the University of Bergen (UiB). It consists of six quick questions, which is great to get through. However, it is self-diagnosed. So if you are in denial about how you should truly answer the question, well, the test won’t identify you as a Facebook addict and you’ll continue to be in denial.

END_OF_DOCUMENT_TOKEN_TO_BE_REPLACED

Have you ever seen a video on YouTube you wanted to use that had embedding disabled so you can share on Facebook or other social media platforms? What about wanting to have just a part of a video for your use? How’s about a version to use on your blog that won’t be taken down in the early stages of the battle by certain people to have certain videos removed? If you answered “yes” to any of the questions, or are curious about them, this post is for you.

Attempts by some to disembed videos happens all the time with the public posting stuff that are probably copyright violations, but so what? If the video is hot, there’s a whole bunch of people out there posting or reposting to thwart the efforts of those trying to remove the video, and to get views for their accounts. Those who try to prevent video posting or embedding usually fail in the end cause they can’t keep up with the reposters, but they don’t seem to learn. Your ethics here are only good for yourself.

Some examples of videos I’ve used that have been at the centre of such removal battles include these three within two months of this posting:

The first or subsequent versions I had were disembedded or removed. However, a quick 2 minute or less search yielded another one to replace the codes with and that was that. I actually just replaced the Taylor Swift interview on The View video in that post. They’re still trying! It’s just the way the world is these days and these people trying to take down the videos should just “get with it”.

In another situation, often, the best part or the part you want to share with someone is not the entire video. Or maybe someone’s corrupted the video with their add-on advertising and so on. Or maybe you only want the portion of Susan Boyle singing during her Britain’s Got Talent 2009 debut, rather than the entire segment. It’s annoying to have to use the whole video in those instances. They’re all good reasons to get your own version of a video.

Getting a video you like for your own use so you don’t have to let it load every time, or for when you don’t have Internet access, is another good reason, too. Convenience!

If you’ve encountered any of these situations, you can get around them a variety of ways using video capture software. It’s like how you can take a screen shot of what you view, then paste into a photo editing program to capture pictures or video stills you aren’t able to download or get otherwise. Only here, you’re doing it with entire videos, using a method similar to how you record music off the radio.

A good list of video capture software can be found at All Streaming Media. However, I want to share my experience with one called Replay Media Catcher by Applian Technologies. The demo is free at the previous link. They don’t even request an email! It’s very easy to use and works completely for YouTube, which is really where pretty much all the good videos worth sharing is anyway. Videos on other site only have 75% capture, but which may include the good part you want anyway. It seems to be the best of the bunch listed at All Streaming Media, with an Editor’s Choice approval. I don’t doubt it!
.

To open the software 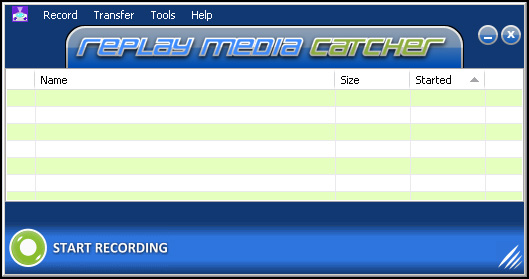 .
To record a video:

That gets you the video on your hard drive, but it is in some temporary storage space you can’t access. It is a permanent storage space, though, meaning you can exit out of Replay Media Catcher and shut down your computer and come back to find it again. However, until you get it out of that space, you can’t use the video.

.
To extract your video:

With your file, in Adobe Flash Video format or FLV extension, you can upload it to YouTube as is. That’s another lesson but I’m sure you can figure it out as YouTube does a pretty good job to make it easy. You just need to create an account on YouTube and follow their instructions there. The FLV extension doesn’t seem to be the most natural for YouTube. It took something like 10 minutes to process my upload. Maybe that’s normal. I’ve never uploaded a video on YouTube till now.

Getting the sound off the video as an MP3
With Replay Media Catcher, you can also extract just the sound track for those videos for which you can’t buy the soundtrack, whether that’s the Liverpool FC fans singing You’ll Never Walk Alone, or Susan Boyle singing her Britain’s Got Talent debut in that electric atmosphere of people in shock and egging her on.

.
Smart Reposting
Finally, a few points about smart reposting to give some longevity to your repost in the war between posters and those trying to take down your video. Well, they’d be trying to disembed it to prevent easy social media sharing (what you probably want to do most in reposting), because taking it down is another war altogether that they have with YouTube.

Hope all this helps! Go be a rebel!

Note: Since this posting, I have evolved Facebook picture tagging memes on my own ideas far beyond this concept I saw. My ideas involve real world and life actions rather than just associating ideas. They are listed under the Action memes category, involving what I call Facebook 2.0 tagging memes.

The pictorial Facebook tagging memes that have been going around in many variations seems to have evolved into that common high school year book feature, the Most Likely To… page. I saw one just hours ago, but it was so poorly done (mostly due to almost unreadable small type) I went and created my own, text, picture compilation and all. Here’s how to get it:

In case you don’t recognize some of the people in my new version, they are as follows, left to right:

You can Google these people if you want to know more about who they are, and maybe guess why I’ve put labeled each as such.