In music, there is a thing called covers, where musicians perform their own interpretations of pieces. Often, these are songs, by different artists other than the original ones, and in the same genre, so rock covers are still rock. However, covers could involve instrumental pieces like classical, jazz, or other wordless compositions. They could be by the same artists later in their career. But for me, the most interesting and fun covers, whether I like them or not, are ones in different genres. For fun, I’d like to share some examples from a Switched on Pop podcast I recently heard on Beethoven’s Fifth Symphony, and wonder why such covers aren’t more prominent in literature with the classics now in the public domain. The podcast episode was the third of four, but the entire series was magnificent and I would highly recommend it!

END_OF_DOCUMENT_TOKEN_TO_BE_REPLACED 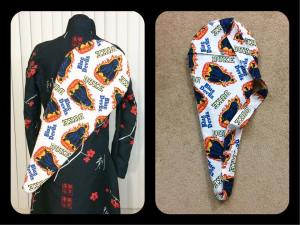 It’s been a while since I’d done a fashion garment or accessories post so I want to let you all know that I name all the things I sew as a way to quickly reference them. Here, I have a tennis racquet cover and so to play on, both, a verbal and written pun of racket and racquet, I am calling this accessory LOUD. I am also putting a double meaning in LOUD for the visually “loud” design these racquet covers will be since I can choose any fabric I want in making them.

Quite the clever and funny name, I thought! 🙂

END_OF_DOCUMENT_TOKEN_TO_BE_REPLACED

Below are 77 Star Trek Facebook Timeline Cover Photos. They were made from my collection of Star Trek wallpapers for various monitor sizes, mostly involving star ships rather than characters. Not all those wallpapers were suitable for the elongated Facebook Timeline Cover photo format so only some are here, but most of them worked. These are 1700 x 630 pixels, or twice as long and wide as Facebook says is necessary, in order to make sure they display well on widescreen monitors. To get the graphics for your use: END_OF_DOCUMENT_TOKEN_TO_BE_REPLACED

From the collection of Hello Kitty / Sanrio wallpapers I had assembled on my site, I have created Facebook Timeline cover photos from them. These are 1700 x 630 pixels, or twice as long and wide to give more graphic resolution than Facebook requires so the graphic can turn out as nice as possible, even on widescreen monitors. END_OF_DOCUMENT_TOKEN_TO_BE_REPLACED

These came from the Twilight wallpapers and printable posters graphics I have on this site. I have cropped them and prepared them to be ideal for Facebook Timeline Profile Cover photos, not just in dimensions but also colours and image cropping to get the best of each picture.