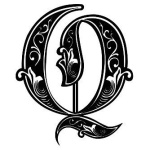 What’s the best thing you can give someone? Love? Time? Kindness? There’s no answer to that question that is 100% correct, but I’m going to make a case for a chance because it could represent all those other things, while allowing someone to form part of their identity to someone else.

Growing up, the thing I wanted the most often was a chance to do something, for which I was often denied. Sometimes this was for good reasons like lack of family finances. Other times, it was not, like discrimination on my ethnicity or small stature. However, I was fortunate to have been given the chance to do a lot of things, many of which I didn’t ask for, but for which I am most grateful. That’s why when I saw a quote in my early 20s stating the best thing you can give someone is a chance, unsourced, I embraced it as a life philosophy. It generally worked well, except one question irked me. What if nobody gave me a chance to do what I wanted, whether nobody present to do so, or nobody because someone denied me the chance?

By my late 20s, as I worked to acquire resources to do more things in life, I realized the only way I was going to get the chance to do some things was to give myself that chance. Far more than just the resources, though, I was going to have to give myself the time, faith, support, love, motivation, and kindness should I fail or suffer along the way, and so on. In giving someone a chance, you also give them that, with some of the qualities being more blind than in giving them to yourself, if you didn’t know that person well. So I tweaked the quote the best thing you can give someone is a chance, to add including yourself, in the middle to reflect that and made it my #1 life philosophy. 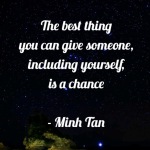 This post is one of 70 quotes I wrote, each with an accompanying essay, in my e-book and paperback Stars I Put in my Sky to Live By, on Amazon or Smashwords (choose your price including free!).