Have you geeks and nerds seen this? I’m sure the really hardcore ones have. Others probably not unless you paid attention to equestrian charity events.

On December 5th in Villepinte, France, world class equestrian show jumper Penelope LePrevost rode as Darth Vader in full costume! She was in the Darth horse role, if you will. 🙂

Yes, the horse is strong in this one! 😉

I can’t find any video of the event online, but I wondered if the French went crazy as North Americans would have. They should do that in North America. It would bring down the house! 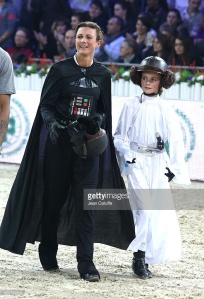 May the horse be with you, Penelope!

No, seriously! Cause if it weren’t, you’d be falling off the thing! lol

CNN just projected Barack Obama has been re-elected President of the USA in 2012 as I write this! Woohoo!!!

To celebrate, I thought I’d share some pics that you can post to show your feelings about the victory… and maybe get a few laughs!

Here in Canada, for a lot of American sport events, the American commercials are replaced with terrible Canadian ones. This is true even on cable on the American channel itself, not just the simultaneous broadcast on the local network. In Nova Scotia, where I am located, the commercials are even sub Canadian standards. They’re so awful I will often skip watching a show or an event, or go out to a place where I can watch it without those commercials. Or I’ll get what I’m looking for from another source, like news from CBC NewsWorld or MSNBC instead of CNN that’s now proliferated with ghetto budget local business ads when I’m there to be thinking globally.

Do these Canadian ad buyers think they’re getting their money’s worth for those prime spots?

I know there are some rules about rights across the borders, and Canadian content rules and such, but that’s for the channels to worry about. The ad buyers don’t have to buy in to this, and without them, the channels don’t have commercials to run. The channels probably offer ad time with events like the Super Bowl as a bonus to a package rather than selling ad time during the event like it’s done in the US. Still, I would decline it if I were a Canadian ad buyer cause I don’t think people think of those spots fondly.

Now, those channels don’t even have a chance that I might surf by and catch something I like when channel surfing. I get local news from the CBC solely now, and you know what? I’m doing just fine without those other channels. I’m not even losing Canadian content, cause it’s not like they show much Canadian content anyway. Why bother with Canadian commercials on prime events, or even just for the Super Bowl, if resentment like this, with some people turning it into action, is what you get?

For events less prime than the Super Bowl, where I might put up with Canadian ads on overridden American shows, I take note of some of the advertising companies and occasionally put them on my “no buy” list. It’s not that I end up watching the commercials to do this. Usually, they annoy me enough from what I’m doing to distract me, and then it’s an easy choice. Eastlink was the first on my list.

I wonder if some of these companies ever imagined their advertising strategies to lead to this?

Oh, and here’s a great example why I go the extra distance for the Super Bowl with the real ads. 🙂