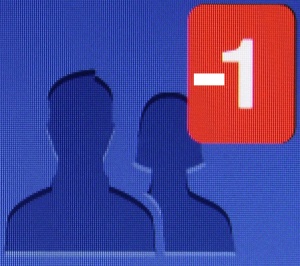 Like most people on Facebook, I have more Facebook friends than are really “friends”, even in the loosest sense of the word to mean a passing acquaintance. Despite this lack of any real sense of a relationship with some people, they get pissed off if you unfriend them. The egonomy is alive and well despite what the economy might be doing!

END_OF_DOCUMENT_TOKEN_TO_BE_REPLACED

Yesterday, I posted about cleaning up your Facebook and other social media “friends” list. Of course, potential consequences come with this because people will be “people” to take things personally that they have no reasonable cause to do so. That potential awkward moment or situation, immediately or in the future, in person or online, is enough for some people to avoid removing people from their social media friends or following list. So I have an idea to counter that while still allowing you to parse down your friends or followers list.

END_OF_DOCUMENT_TOKEN_TO_BE_REPLACED

As part of setting or resetting things in my life for the new year, I updated my Facebook friends list. I mostly dropped some, using tips I wrote in 2010 on which Facebook friends should I remove. However, I also added a few who have recently come into my life and who I can say with some confidence I will see and interact with again numerous times in the near future.

END_OF_DOCUMENT_TOKEN_TO_BE_REPLACED

I’ve recently written some posts on purging your Facebook friends list due to the misuse, abuse and harm of Facebook friendships incurred by many people (links below). The issue has recently gotten more attention via talk show host Jimmy Kimmel calling for Wednesday, November 17, to be National Unfriend Day of NUD, and I am here to help with some tips and challenges should you want to take part in National Unfriend Day. This also goes for MySpace, LiveJournal, Bebo and other social networking platforms where you can add friends, but the main focus is on the largest social networking platform in the world, which is Facebook.

Because Facebook friends can be spies, now or in the future when someone decides to no longer like you, especially people you don’t know well but have as Facebook friends. With Facebook’s new Friendship Page feature that gives everyone creepy new spying capabilities on other people’s profiles, the fact that Facebook friends can be spies has never been truer. Facebook friends have access to everything you have unless you block them from specific things. But let’s be serious. How many people really do that? And even if you did, isn’t that enough of a creep factor to get you to unfriend them? And why are you causing yourself stress in watching your back on Facebook all the time since you might have to block certain friends from potentially every new thing you post?

If you missed National Unfriend Day, there’s no reason NUD couldn’t be any other day during the year for you. In fact, I would recommend you purge your Facebook friends list several times during the year.

It seems to me we’ve had enough bad stories of people getting caught on Facebook for everything from cheating to hate statements to inappropriate work comment and other such bad behaviours, but not many people still care all that much. Just remember, those behaviours aren’t what got those people in trouble. It’s the fact they had Facebook friends who saw the behaviours and did something about it, even if unintentional like sharing it in some way, online or in real life.

This could be tough for some people to do so I have a set of questions you can ask yourself of each Facebook friend you might consider removing. These are for the less obvious choices, but can be for any one on your Facebook friends list.

Will people think you mean for dropping Facebook friends?

Hardly. People seem to think that those with tons of meaningless Facebook friends are the ones who are insecure. Knowing who your friends are, and who are not, is a sign of personal security and integrity, not being mean.

What if the unfriended request being friends again?

If you have common friends with someone you untag, they may notice having been removed if you post something on your mutual friend’s wall and they see it by looking or a notification of others posting on the same post. They’ll probably only realize it because they see your name and realize they hadn’t seen any updates from you in a while. So what if they add you again? Awkward?

Try my Remove 5 Facebook Friends challenge. This was posted on September 30, by the way, 5 weeks before Jimmy Kimmel asked for National Unfriend Day. 🙂

I highly recommend you do this after you unfriend the people you tag, of course. Now, you can’t tag a picture with a link to someone you aren’t Facebook friends with, but you can always type in their names instead of choosing from a box listing your Facebook friends. This is like if you were to tag a photo of the Loch Ness monster, Darth Vader, Wolverine, Harry Potter, Bella Swan or anything else. They don’t have Facebook profiles, so far as I know, but you can still tag them in pictures. Same idea for Facebook friends you’ve dumped.

Good luck with National Unfriend Day, Jimmy and the world!

I don’t know how much media clout, or pull, Jimmy Kimmel will have in proposing National Unfriend Day, but it’s good advice. Even if it doesn’t do well, it’s the first year. Things take time to adapt, and more time if it’s a once a year occurrence. But remember what I said above…

If you missed National Unfriend Day, there’s no reason NUD couldn’t be any other day during the year for you. In fact, I would recommend you purge your Facebook friends list several times during the year.