A few days ago, I shared a data visualization I did for the North American Vexillological Association (NAVA) to support their international press release on a flag survey they did in late 2022. Today, I have the analytical one ready, intended more for research, or to find things to research and answer among the results.

END_OF_DOCUMENT_TOKEN_TO_BE_REPLACED

A few days ago, the North American Vexillological Association (NAVA) released results from their New (since 2015) American City Flags Survey to media in the 312 cities who had flags in the survey. They also released the results to select other media outlets they have relationships with for decades. Supporting this news release was a data visualization I did to show the full results in an interactive way, including images of the flags discussed.

END_OF_DOCUMENT_TOKEN_TO_BE_REPLACED

So will the rest of the world unless you’ve been piecing things together.

Next to no testing for weeks with sufficient number of cases going around, from government direction to a health care system that doesn’t incentivize doing so.

People can spread for 5 days without having any symptoms, never mind once they do and still don’t get tested.

People ignoring social distancing and actually bragging about it! Though they’re not ignoring stocking up on toilet paper, apparently, and bragging about it, too! Typical American bravado of we’re better, can’t happen to us, or at least me, we got it covered, etc. We’ll see about that, one way or the other.

So how much will be the shock? My best guess from learning about the DOTS model for spread, with parameters for COVID-19, is it’s going to easily outnumber China’s peak by summer, if not sooner, pending how much testing will actually be done. It’s easy to say you don’t have a lot of cases, and be “honest” about it, if you don’t test to know… kind of like now.

But please do NOT spread like fear mongering rumour. I’m not claiming to be an expert. I just believe I have enough to know to put out a plausible guess, to see if that self-assessment is correct, or incorrect, and to what extent.

So this is “for the record” to look back upon.

The effect a bad meeting has on you that negatively impacts your mood, thoughts, well-being, and/or productivity.

All jokes aside on the term and name, this is a very real phenomenon, which is why you should learn to think about, be aware of, and use this term!

From a great Freakonomics podcast… 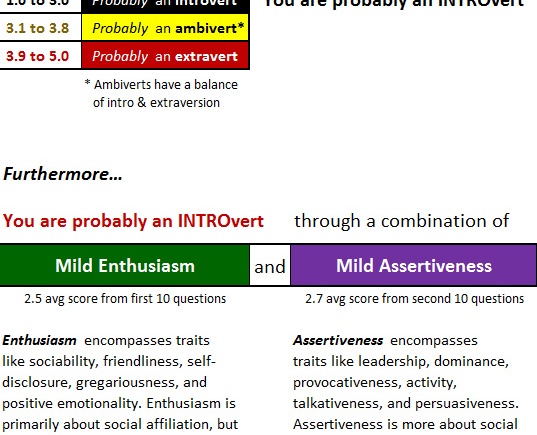 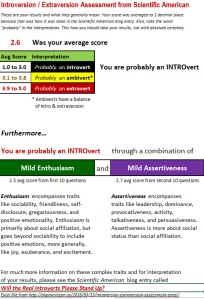 On June 9th, 2014, the Scientific American blog Beautiful Minds had a rather in-depth article called Will the Real Introverts Please Stand Up? about what introversion really meant (and extraversion as the opposite). The term is still highly misunderstood, whether from generic social definitions, or more precise and complex definitions through the works of Myers-Briggs and others following.

In the Beautiful Minds article, they had a 20 question quiz written out. Some score adjustments were then required after you answered, followed by averaging your newly adjusted scores, and averaging two halves of your score if you wanted more information. In this post with an Excel spreadsheet attachment below, I have made this test a lot easier to take. You just answer the questions and flip through the process to see your results! There is a minor summary of your results, but you’d then go back to the original article linked above for the full details.