For the opening of the 2015 Thursday Night Football season with the Denver Broncos visiting the Kansas City Chiefs, there was an inspirational 1 minute 42 second speech by Forest Whitaker shown below. The video works if you play it on YouTube. The NFL just made it inconvenient for us not to show it when embedded in WordPress.

I’ve taken the time to write out the text below (as well as put it in a JPG) because even more inspirational than listening to an inspirational speech, is reciting it aloud yourself! If you’re even keener, practice it so you recite it better than just reading it aloud first time around.

It’s empowering as well as inspirational, and it works whether you’re an introvert or extrovert, doing it by yourself or to friends or family. The latter might actually benefit from hearing any inspirational speech you choose to recite if they had not heard it before, or even just hearing it from someone they know!

You don’t have to do it in the same style as the orator. Actually, I would encourage you put your own style to it! Make it yours! Go for it!

The Thursday Night Football speech text is below.

p.s. This video seemed to have also been a premonition. The kid fumbles the ball during tackle practice. Then he goes on to wear a Jamaal Charles jersey to the game. And what happened? Jamaal Charles fumbled the ball twice to cost his team the game (and he said that, not me blaming him). And now, Jamaal Charles could probably use this speech more than anybody else! I’m a Broncos and Peyton Manning fan, but I wish Jamaal all the best on the road back. Go for that feeling, man! 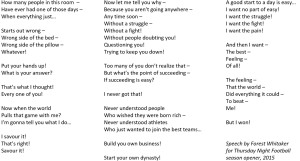 Put your hands up!
What is your answer?

That’s what I thought!
Every one of you!

Now when the world pulls that game with me?
I’m gonna tell you what I do…

Now let me tell you why –
Because you aren’t going anywhere –
Any time soon –
Without a struggle –
Without a fight!
Without people doubting you!
Questioning you!
Trying to keep you down!

Too many of you don’t realize that –
But what’s the point of succeeding –
If succeeding is easy?

I never got that!

Build you own business!

Start your own dynasty!

A good start to a day is easy…

I want no part of easy!

The feeling –
That the world –
Did everything it could –
To beat –
Me!

For other scripts for public speaking practice on this site, please click here.