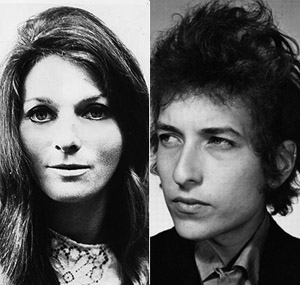 I am making my way through the Dylan discography to learn more about his music. I have to go slowly because like Emily Dickinson’s poetry, you can only take so much at a time before you either go numb or it hurts your head too much to take any more given the power of all the meanings contained within it. The beauty of good poetry is that it’s like being able to tell many stories in many languages all at once. The beauty of a song with good lyrics is that it adds one more language, the universal language of music, to the power of poetry.

Not long ago, I came across this hidden gem of a song by Bob Dylan, Dark Eyes. Bob Dylan has written many songs amazing to an extent I don’t have words to describe them, but not all are well known. That’s why I called it a hidden gem.

(Courtesy of Wikipedia)
From the 1985 album Empire Burlesque, Dark Eyes was written virtually on demand when Arthur Baker suggested something simpler for the album’s final track. Dylan liked the idea of closing the album with a stark, acoustic track, particularly when the rest of the album was so heavily produced. However, Dylan didn’t have an appropriate song. He returned to his hotel in Manhattan after midnight, and according to Dylan:

“As I stepped out of the elevator, a call girl was coming toward me in the hallway – pale yellow hair wearing a fox coat – high heeled shoes that could pierce your heart. She had blue circles around her eyes, black eyeliner, dark eyes. She looked like she’d been beaten up and was afraid that she’d get beat up again. In her hand, crimson purple wine in a glass. ‘I’m just dying for a drink,’ she said as she passed me in the hall. She had a beautifulness, but not for this kind of world.”

The brief, chance encounter inspired Dylan to write “Dark Eyes,” which was quickly recorded without any studio embellishment. Structured like a children’s song, with very rudimentary guitar work and very simple notes, it’s often quoted for its last chorus: “A million faces at my feet, but all I see are dark eyes.”

.
As for what I think of Dark Eyes, I would put its lyrics, following the fan video below, on the same level as any other of Dylan’s songs. That’s a general ranking, though, rather than one for purposes like war songs or love songs, etc. I especially like how the “chorus” is just one simple line at the end of the verse, as simple as the musical structure of the song. This version I heard, though, was magnificently performed by Judy Collins who not only had a beautiful voice, but a beautiful one to properly treat this song in performance. Everything all taken into account, Dark Eyes has already become a favourite Dylan song, and Judy’s version a favourite Dylan cover.

Oh, the gentlemen are talking and the midnight moon is on the riverside,
They’re drinking up and walking and it is time for me to slide.
I live in another world where life and death are memorized,
Where the earth is strung with lovers’ pearls and all I see are dark eyes.

A cock is crowing far away and another soldier’s deep in prayer,
Some mother’s child has gone astray, she can’t find him anywhere.
But I can hear another drum beating for the dead that rise,
Whom nature’s beast fears as they come and all I see are dark eyes.

They tell me to be discreet for all intended purposes,
They tell me revenge is sweet and from where they stand, I’m sure it is.
But I feel nothing for their game where beauty goes unrecognized,
All I feel is heat and flame and all I see are dark eyes.

Oh, the French girl, she’s in paradise and a drunken man is at the wheel,
Hunger pays a heavy price to the falling gods of speed and steel.
Oh, time is short and the days are sweet and passion rules the arrow that flies,
A million faces at my feet but all I see are dark eyes.