On this biggest sports day of the year, the Super Bowl, I pondered why NFL football remains America’s #1 sport.

NFL football became America’s #1 sport through a variety of complex, interwoven and additive reasons as analyzed here in the Bleacher Report. The reasons why it has remained so, and only widened the gap, are a little different, in my opinion. The latest survey from Harris for ESPN shows some interesting demographic divides among the popular sports, though, but it’s not these demographics I’m looking at, rather the overall results. Finally, I have to be clear that #1 is for watching and interest, not participation. That belongs to soccer, probably for its ease to be able to play without huge costs for gear and facilities to play in.

END_OF_DOCUMENT_TOKEN_TO_BE_REPLACED

BERLIN (Aug 16 2009) — At the IAAF Championships in Berlin, Jamaican super sprinter Usain Bolt destroyed his own 100m world record set at the Beijing Olympics last year by 0.11 seconds with just 41 strides. He lowered the record from 9.69 seconds to a remarkable 9.58 seconds and stunned the Berlin crowd in attendance because the 100m records is supposed to be broken in hundredths of a second, not tenths of a second! I don’t doubt he also stunned the rest of the world, whether or not you had high expectations for the guy.

Don’t expect that record to last too long, though, unless Usain gets injured or something. Usain still took time to look over to the clock at the left before finishing instead of going full tilt to the finish line. Check the video above. As well, these athletes peak between 26 to 33 years old. Usain will turn 23 on Aug 21. He also ran this race near sea level (about 40m above in Berlin). At altitude where the air is a bit thinner, and with a tail wind instead of a head wind (2.0m/s legal), who knows what he could do??? Incredible!

I’ll tell you one thing. There’s a lot of hype about a lot of people, but this guy lives up to it!

Congratulations, Usain! Now let’s get to that sub-19 200m your coach was talking about for the birthday present! 🙂

Defending world champion Tyson Gay of the United States came a distant second in a fast 9.71 seconds, lowering the American record from 9.77 seconds. It was the first time Usain and Tyson had met in a 100m race in over a year and this was possibly the most anticipated 100m final since 1988 Summer Olympics when Carl Lewis and the now disgraced Ben Johnson went head-to-head. Asafa Powell was third.

Other notes:
In the semi-finals, Usain ran a “casual” 9.89… and I mean casual. He looked like he was jogging it in, and that’s no exaggeration. By contrast, Tyson Gay ran a huge effort full of tension in semi-final 2 only to win it in 9.93 seconds. Usain Bolt only takes 40-41 strides to cover the 100m, with a stride length of about 2.7 to 3 metres (9-10 feeth) in full flight mid-race. That would be mid-race because he hasn’t ran full flight across the finish time in a big race for a while, I don’t imagine. Usain is 6’5″, very tall by sprinting standard, but with his high turnover that he can put to his huge stride length, there’s not anybody who can come close to matching what he can do right now. Might he change the profile of athletes to be recruited and/or developed for sprinting in the future? The short height profile seems to have maxxed out. 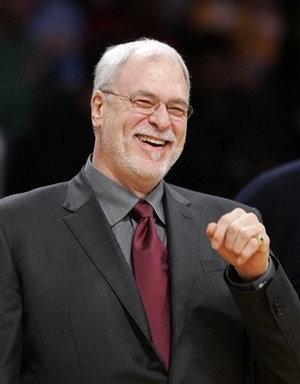 Jackson’s 10th title passes the great Red Auerbach’s 9 to set a new NBA record for championships won by a coach. But let’s get one thing straight, though. Auerbach might have been great, but ultimately, he was a sore loser by the quote below before he died in 2006.

“[Phil]’s never tried building a team and teaching the fundamentals,” Auerbach said. “When he’s gone in there, they’ve been ready-made for him. It’s just a matter of putting his system in there. They don’t worry about developing players if they’re not good enough. They just go get someone else.” [Yahoo!]

It was two different styles in two different eras, but there’s no telling what Red Auerbach might have done in this era. Auerbach’s teams weren’t exactly depleted of stars, but given the egotist he was shown by that comment, what do you think would have happened had he had those egos like Kobe Bryant, Shaquille O’Neal, Michael Jordan, Dennis Rodman and others on his teams? He’d have had to have been the biggest ego on the team and shipped them out. He wouldn’t have known how valuable these players truly were, with their faults elsewhere than in the basketball skills. Maybe Jackson walked into those teams, and maybe he went and got what he wanted, but Auerbach would have shipped them all out had he been coaching those same personnel.

And this comment about not teaching the basics, that’s a load of BS from a bitter old guy. Why don’t you ask the stars what ultimately makes the difference in the game? You can have all the desires you want, if you don’t have the fundamentals, you won’t be winning anything worth writing about. And don’t tell me these guys had all their fundamentals down, or maintain them without being taught. Since when did any star have so much fundamentals they couldn’t use more? Maybe Jackson didn’t teach everything from scratch, but he could have because he still had to teach it. He may not have had to teach as large a set to every player as Red did, but he still had to teach them, and there’s no doubt he could because if he couldn’t, he wouldn’t be here. I would even say Phil, the Zen Master had the harder job cause he had to teach it to guys who thought they knew it all. Red never faced that nearly to the same extent. He wouldn’t have put up with it and shipped them out or benched them. It’s a different style that doesn’t work today.

And the Zen Master, he would never say any such thing about any rival, including Red. Phil just acknowledged on TV that Red was a great guy when asked about his relationship with Red being “competitive”. Phil said he’ll “smoke a cigar in memory of Red tonight”. To say anything so petty or negative of a worthy competitor like Red, as Red said of Phil, just would wouldn’t be zen… now or zen.

So Red, if you’re in Heaven, which I’m sure you are instead of some other place, I hope you’ll have changed your mind and heart by tonight cause Heaven ain’t got no place for people who are anything less than happy.

If not, may I respectfully say, get the Hell out of there!