Brad Pitt at the spa getting a facial. JUST KIDDING! Though they reminded me of stuff stars don

In the newly released (Feb 23) 18 minute video below, Ed Ulbrich demonstrates the technology of his Digital Domain team which allowed Brad Pitt to act out Benjamin Button‘s face throughout the movie, at all ages of Benjamin’s life. That way, all of Brad’s nuances and unique acting skills were able to be applied to the character throughout the movie, not just the part where the character resembled Brad and he could play him. It was almost like unspecial effects, if common effects did not convey something far less worthy, where the special effects were meant to be as unnoticeable as possible.

The video is far better than I can explain it. However, I’ve given you some interesting, albeit less than flattering photos of Brad at his work, with brief descriptions of their roles in the process. The photos were screen captured and compiled from the video to give you something to hang on to, put on your blog or whatever. Video is not the same as photos and these leave a few lasting memories of Brad Pitt like you’ve not likely seen him, like him at 80 years old below.

On the inspiring side of the talk, and as a mind blowing subplot, is the courage Ed’s team had to walk away from the state of the art technology of the day to come up with this technology since the best wasn’t nearly good enough. You’ll see in the video why it really wasn’t really nearly good enough.

The courage and ingenous outcome to “stew-pot” existing technologies as a foundation on which to build the new technology was what got Ed (for his team) the invite to the Technology, Entertainment and Design (TED) conference where he gave this talk.

High-powered as TED may be, though, the talk was easily understandable, enjoyable and jaw-dropping, as one category for ranking TED.com videos went.

Brad Pitt being filmed from four angles to make sure the right shot was captured. The phosphorescence on his face does not show on this regular film.

Brad Pitt's projected look at the age of 80, from which they created Benjamin Button's 80 year old looks onto which to project Brad's expressions above. They use this sort of technology to predict what criminals would look like years later, and you can see it on shows like Cold Case Files.

Brad Pitt's phospherence image to the computer is at left. A starting head model for movement purposes is in the centre. The aged version based on Brad's older projected look is at right. The fine details are left out to get all the movements right first.

Out of the darkness and computer simulation environment, with some basic facial details added, a basic Benjamin Button comes alive simultaneously with Brad's acting. 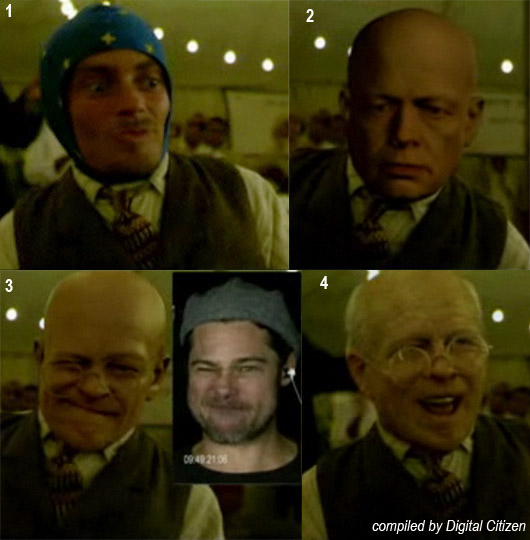 1. An actor plays a body double, with a blue hood to take out the head for computer substitution. 2. A "dead head" computer model is put in to simulate movement. 3. Brad then acts in the facial details. 4. Lighting, hairs, eyes, tongue and such facial details are added for the finished movie version.

Wait. Speaking of tongue, this is a model of Brad Pitt's mouth and tongue model, worked on by a guy to get it right for 9 months! I heard he was pretty popular! Probably not sexy in this context, but just use your imagination! 😉

Ed Ulbrich: How Benjamin Button Got His Face