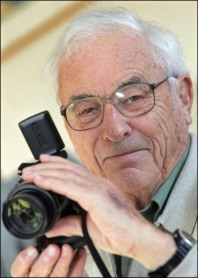 Update:
A sad update that Willard Boyle passed away Saturday, May 7, 2011, at the age of 86. He had been named to the Order of Canada last July, after having received the Nobel Prize in 2009. As long as digital photos will be a part of our lives, whether in our cameras or even integrated into us in the science fiction future, his work will continue to have a great impact on all of the human race. Just think of what roles and value digital photos play in your life today, and you’ll truly appreciate the impact of his work.

As a blogger and digital citizen of Nova Scotia, I have to give a huge shout out to fellow Nova Scotian Willard Boyle. Mr Boyle was awarded the Nobel Prize in Physics for 2009 today, with fellow inventor George E. Smith, for their work in 1969 at the Bell Labs to develop the charge-coupled device (CCD). The CCD transforms light into a large number of digitized image points, or pixels, in a split second. It’s like how a transistor handles sound. For the everyday person, that’s the magic in your digital camera, faxes, camcorders and imaging devices that makes them work. CCDs are in cameras large and small, from the tiny, delicate ones found in operating rooms and the heavy-duty versions inside massive telescopes, including the Hubble Space Telescope. See the science here at Science.ca

“Digital cameras are big and everyone has one,” Boyle said. “It’s having a tremendous effect on how we live and how we do things.”
(Yahoo! News)

Already nick-named the Father of Digital Photography, Willard Boyle also worked with NASA to select the spot for man’s first moon landing in 1969.

I prefer to call him the Film Annihilator or something of the sort.

“Know how to judge when to persevere and when to quit. If you’re going to do something, do it well. You don’t have to be better than everyone else, but you ought to do your personal best.”
— Willard Boyle

But you know, it’s kind of strange that for all Mr Boyle has done, a lot of us Nova Scotians haven’t heard of him until today. In a place where the expression “everybody knows everybody” is more true than not, it took an announcement from Sweden for us to know Mr Boyle. But now, the expression “everybody knows Willard Boyle” will at least be true in Nova Scotia. Maybe not personally yet, but we’ll all know of him soon enough.

Some other facts and stories about Willard Boyle and the news of the Nobel Prize victory today, with a complete profile at Science.ca (the person, career advice,

Boyle said he knew the Nobel Prize was about to be awarded but thought it was taking too long and he had written off any chance of winning.

“You know how it feels when the phone rings at 5 a.m.,” said Betty, his wife of 62 years. “You think emergency or wrong number.”

He was incredulous when he heard a woman with a Swedish accent tell him he had won.

“I thought, ‘Oh, God. Not that same old joke … And then in the sweetest voice she said, ‘I’m in Stockholm and I want to tell you about the Nobel Prize.’ Then I said, ‘Gee, maybe this is real.’ And, it’s the real thing,” he said, laughing.

The Nobel ceremonies are on December 10th, and Mr Boyle plans on attending. He will probably be joined by another McGill university alumni, Jack Szostak, who won the Nobel Prize in Medicine on Monday.

That’s like two Nobel prizes in two days for McGill. Is this a good week or what, eh? 🙂

Finally, Mr Boyle offers these insights into the nature of engineering and science in Nova Scotia and Canada today. Some of it is quite interesting, I must say, and I also must agree with a lot of it. Comments from an interview for the local paper, the Chronicle-Herald, which archive their stories after a week so a link isn’t much good.

Mr Boyle would like to see governments look back at the practices of the think-tanks that produce Nobel Prize-winners and their useful technology, instead of “pouring money randomly into (things), expecting the same results.”

“Usually most of the management people or the politicians haven’t got the foggiest idea of what science is all about,” he said. What is needed is “an appreciation for the free will, free spirit of scientists. Give them a chance to do the things they want to do.”

What scientists face today is “almost disgraceful…the bureaucrats want to get a hold of the money and ask for business plans. Now do you think that George Smith and I ever wrote a business plan? Not at all,” he said laughing. “You don’t have time to do that kind of baloney.”

The problem for governments and industries is to decide whether it’s worthwhile to support a scientist, “and that means the management itself has to have some appreciation for science so they can sort out the good quality work from the garbage.”

The foundation for that appreciation is laid in the early years, by teachers in the school classrooms.

“Teachers themselves have to have some knowledge of science. It’s surprising how few of our teachers have any really sincere interest in science,” he said.

One of his granddaughters is working on her education degree, but has never had a university course in mathematics or physics.

“To me, that’s unthinkable,” Mr. Boyle said. “The arts people would be shocked, I suppose, if somebody went through arts and had never read a book… but they can be a teacher and have zero information about physics.”

Mr. Boyle didn’t want to be “an old fuddy-duddy… pontificating,” but said that he’d like to see teachers who think “science is a fun subject.”

“So many happy things are happening in science, really, compared to the rest of the world where there’s nothing but mayhem. In science, there’s a lot of people that are doing useful thinking.”

There are many bright minds born and raised in this province, he said.

“Unfortunately, a lot of them leave Nova Scotia. It just seems to be the way it is, and that’s partly the attitude of industry. They (scientists) don’t believe they’re going to support the research properly.”

His own family is scattered across the country and around the world, but they all came together this summer following a family tragedy. His eldest son, Robert, a 62-year-old geologist and businessman, succumbed to a brain tumour and died in London, U.K., in August.

“It was very difficult,” Mr. Boyle said. “In a way, it sort of pulled the family together… and (the children) all got to know each other a little better.”

He returned to the comfort of the family’s home in Wallace, “a delightful community of people” where he and his wife have lived for 30 years. It’s where he’s continued to pursue his love of photography as an art form, develop friendships and maintain his connections to the world of science from afar.

“You’d be surprised how many genius people come from Wallace,” he said. “There’s something in the air.”