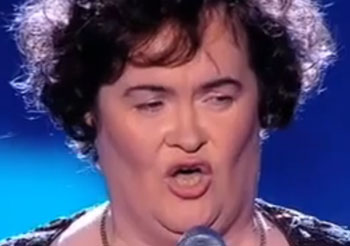 On May 15, I posted an entry about What Should Hollie Steel and Susan Boyle Sing Next?

There, I speculated on some songs the two finest singers in the Britain’s Got Talent 2009 should sing to up the ante for their next performance, now that the world knew what to expect of them that was unlike the first round. I concluded that Susan’s strength was grandeur. She can hit those big fanfare notes like she did in I Dreamed a Dream that was from her first performance. However, she was weak on the playful, soft and less dramatic materials. In the end, I thought she should stick to her strength and pay an hommage to her idol, Elaine Page, with a powerhouse classic on which Elaine has a signature. That would be Memory from the musical Cats.

Sure enough, Susan came out with Memory for the semi-finals tonight, weak on the softer, less dramatic start than the the full flare part 2:22 into the video below. In fact, she was so weak on the softer parts, especially the first few notes, I’d call it awful. Let me tell you, in her audition, with what people expected of her, had she sung those first few notes like she did in this song, Simon would have buzzed her out!!!

True to my predictions, though, Susan got stronger as the song got more dramatic, and recovered enough in time, flourishing at the end to get her through because it is how you finish that matters most. If you’re not well-versed in music, I’ve included a video of Elaine Page singing Memory from Cats for you to compare to Susan’s rendition, especially in that really shaky beginning Susan had. Now, I didn’t expect Susan to be Elaine’s equivalent (yet), and I know she’d be nervous, but I did expect her to hit the right notes and not be that shaky for that long.

I was also disappointed Susan did not show up in costume. She’d have made quite the cat! A “little tiger” as Simon Cowell called her in her original audition.

You can watch Elaine’s even better stage concert version of Memory here, included with my past post.

Regardless, well done, Susan. Congratulations! I’m now waiting for my girl Hollie to stun the world! 🙂